On the cold and rainy morning of Saturday, Nov. 15, most kids in the Columbus area were probably still in bed when the students in the Bexley Scholastic Chess Association arrived at Olentangy Liberty High School for a state tournament.

The members enjoy the mental challenge and competition of chess, and their dedication to the game has led to an impressive string of success at state tournaments.

Most of the members are from the Bexley School district, according to organizer David Neubauer, but the group is not an official school club and is open to any student who lives in Bexley.

On Sunday afternoons they meet at the Cup ‘O Joe on Main Street in Bexley to practice.

"We practice different openings, and we play each other," 9th-grader Raphael Vayntraub said. "When you start a game, you have to get the right opening, to set your pieces in a position where it will give you the advantage."

"It’s an interesting game, and it really makes your mind alert," he said. "It’s definitely helped me with math and stuff like that, to analyze stuff, be patient. It helps in the whole broad scheme of life."

At Olentangy Liberty High School, the players joined hundreds of others from around the state. The scene of two kids sitting across from each other in quiet concentration was repeated over and over again in almost identical form, along long rows of tables across the hushed room.

After the first round, the players filtered back to a table where they ate some lunch and watched their coach, Kyle Jones, as he showed them different scenarios. He whipped the pieces around the board at a speed that would leave a chess beginner dazed, but the Bexley players nodded and asked questions as they followed the movements.

Jones said the students’ enthusiasm for the game is one of the reasons he coaches, and he likes to see their success – and not just the success of the kids who are really good, he is quick to point out.

"Also those that … lose, and they lose and lose, and their self-esteem is shredded because they don’t think they’ll ever be able to win.  And then once they finally win, just to see how enthusiastic they are, excited, it’s like they’ve won the lottery. That’s what keeps me going."

"I think what I most enjoy about it is the analytical part of it, and being able to use those skills to try and make tactics and see farther into your game," senior Adam Neubauer said.

He added the analytical skills come in handy in other parts of life, like math.

"There’s a lot of thought you have to put into it," senior Ben Hoover said. "It’s a battle of minds, you have to outsmart your opponent … that’s probably my favorite feeling, where you plan something out really far in advance, and it works."

All that thinking can pay off.

"I think there are some relationships between good chess playing and other traits that are helpful to people in life," David Neubauer said.
He mentioned the way chess can encourage logical thought, perspective and looking at the big picture. The best chess players, he said, are able to imagine the game several moves in advance.

"I think that’s why the parents who are interested in having their kids learn chess and pursue chess encourage it," he said.  "Because they think that there are tradeoffs that carry over to life in general."

This year’s senior team seems to have learned their lessons well.  They won a co-championship with Columbus Alternative High School at the Olentangy Liberty tournament, continuing an impressive run. It was the eighth time the team had won the tournament in nine years. 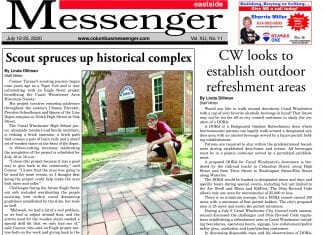