Friends, Maya Lillard, (left) and Danielle Neilsen, 8 of central Ohio raced in the Stock Car Division during the Greater Columbus Soap Box Derby Rally held at Big Run Metro Park May 3-4. Neither girl placed but both agreed that “the most exciting part of racing is flying down the hill.” 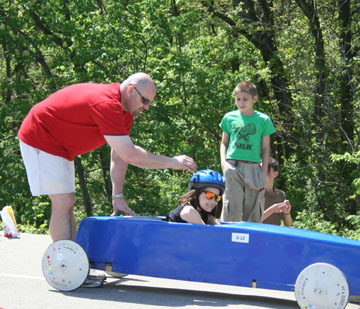 Dan Nielsen helps his daughter Danielle, 8 get lined up for a race in the Stock Car division during the Greater Columbus Soap Box Derby Rally held at Big Run Metro Park May 3-4.

A lot of things have changed since the Soap Box Derby racing program began in 1934. Not only has the sport become more popular on a global level, but today it is more competitive than ever.

This proved to be true when competitors from various parts of the country arrived at the Big Run Metro Park May 3-4 to participate in the Greater Columbus Soap Box Derby’s Spring Rally.

“The weight of the car and driver are combined which cannot exceed the weight limit in each category,” Howe said.

Sam Lillard, a sponsor and participant in the race said, “In the past you made your own rules, you used your own creativity and ideas to compete, but that declined quickly because certain groups started using materials like titanium. Now all the cars come in kits and you can’t deviate from the design – you simply buy the kit and put it together.”

Lillard continued, “In order to make the competition fair the kids are constantly switching wheels as well as racing lanes. The only thing that doesn’t get switched is the driver and the car.”

Ted Riley of Indianapolis said most competitors at the rally were racing for points in order to qualify to race at the National Championship that will be held in Akron, Ohio in July. Riley, whose son is already qualified for the championship said people come from all over the world to compete on a national level.

“These kids just have a blast. We have met people from Germany, Guam, New Zealand and Japan – it’s a huge competition.”

Kelly Mattix, 15 of Dayton won three out of four races in the super stock car division.

“You have to check your car before each race to make sure the wheels are good and everything is working right,” she said. “But the best part is the thrill of flying down the hill and making friends.”

Participants explained that racers want the car to be as heavy as possible but the body weight should be light. Racers are allowed to add weights if need be  but the rules prohibit going over the weight limit.

“Overall the weekend went great,” Howe said. “This is such a great facility and the city has done a very nice job on the track, we couldn’t be more pleased.”

Howe explained that there is another big race on June 21, where only racers from the Columbus area can compete. There will be one race in each division where the winners represent Columbus in the International Championship Race in Akron in July. For the first time this year, there will be dual control cars where a Special Kids competition will be held. The kids will be paired with an experienced driver and will race each other.

A Call for Kindness

Hilltop community celebrates NNO and the reopening of Burroughs Park