Someone took the term “stealing home” too seriously at Westgate Park. A log is positioned where home plate once sat, and probably serves the same purpose. This photo, taken from “home plate” looking out, shows the overgrown condition of the fields at Westage Park, which is so severe that is difficult to tell where the infield ends and the outfield begins. The five baseball diamonds at Westaget Park were chosen to be refurbished as part of a project through a $50,000 contribution by the Cincinnatti Reds Community Fund. 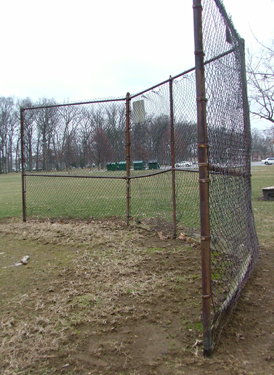 This rusted backstop on Field Two at Westgate will not be a part of the renovations.

Kids looking to “play ball” at Westgate Park this summer will find a few surprises – and improvements – waiting for their arrival.

Anyone who has tried to play a game of baseball at the park over the last few years knows that the baseball diamonds are badly in need of repairs. The infields are so overgrown with grass and weeds that it can be difficult, at times, to find where the infield ends and the outfield begins.

With the help of the Cincinnati Reds Community Fund and the City of Columbus, many of the parks’ problems should be solved by the start of the season.

The Reds Community Fund, a non-profit organization associated with Cincinnati’s Major League Baseball team, works to improve the lives of youth by spreading the love of baseball.

According to the Reds Community Fund Web site, the renovations improve the safety of playing conditions and the accessibility of baseball, provide a positive recreation outlet, and improve the overall neighborhood experience.

Using funds raised through baseball-themed events, the organization operates three outreach programs, one of which is completely dedicated to field renovations.

Columbus Recreation and Parks Department applied to the program and was accepted.

As a result, the Reds Community Fund will contribute $50,000 to renovate 13 fields a Columbus Parks, including all five diamonds at Westgate Park. That money will go towards new clay for the infields, benches for the players and large, bright signs for the backstops.

Not all pieces of the diamonds will be replaced through this project. The backstops, though badly rusted and in need of attention, will remain the same.

“We hope that new backstops might come during another phase,” said Steve Aumiller, recreation administrative coordinator for Columbus.

According to Aumiller, when the Reds have taken up similar projects at other ballparks in Ohio, neighborhood businesses and organizations have stepped up to provide additional assistance to the parks, such as additional equipment and new uniforms for the teams.

“We hope that that will happen here, too,” said Aumiller.

Though the Reds Community Fund provides the materials for the project, “we do all the work,” said Aumiller.

The diamond crew of the Columbus Sports Department will be responsible for spreading the clay and setting up the parks. Aumiller hopes the work will be completed by early spring, in time for the start of baseballs season.

Also, they were looking for a park that has a strong history and community participation in the sport.

“We really wanted to expand on what we had,” he said.

Columbus also did its best to cover all their bases, by choosing parks on the west, north and southeast sides of the city.

In a press release dated Jan. 24, Director of Columbus Recreation and Parks, Alan McKnight, said, “We are extremely grateful to the Reds for providing funding…This is a contribution that will definitely make a difference to the lives of the thousands of youth who play baseball, softball and t-ball in our city.”

The final market of the year