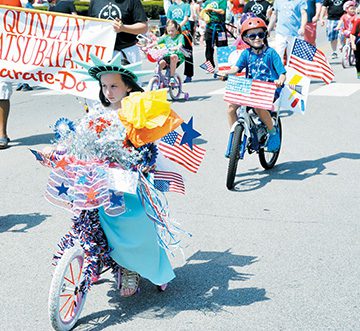 The West Jefferson July 4th Streetfest committee has rounded up three days of fun for the whole family.

The committee hired a new ride company this year. Big O Amusements, serving festivals and events in the Columbus and Dayton areas, will set up a wide array of rides, from kiddie-size to major thrillers.

The West Jefferson High School dunk tank is back. Once again, the cheerleaders and football players will compete to see who can raise the most money.

The theme for this year’s parade, set for Wednesday morning, is “Let Freedom Ring.” Line-up starts at 10 a.m. The parade steps off at 11.

At the end of the parade, military units will turn left on Center Street and assemble at the town gazebo for July 4 ceremonies. All other entries will continue to the Dollar Store parking lot to disassemble.

After the ceremonies, trophies will be go to the winners of tractor and float entries. Cash prizes will go to the first-, second- and third-place winners in the walker, pet and decorated bicycle categories. For more about the parade, call (614) 203-8830.

A car show is set for Wednesday afternoon behind Pat’s Pizza. Registration is $10 and runs from noon to 2:30 p.m. with trophies awarded to the favorite 30 cars and Streetfest Choice. Door prizes and a 50/50 drawing are planned.

Area musicians will provide live entertainment each night. Southern Alibi, a four-piece Columbus-based band, will play country and southern rock on Monday. Alexander, a two-piece out of Columbus, will perform rock, country, jazz, swing and pop on Tuesday. The Southern Rock Band, with ties to Madison County, will perform southern rock, country, and ‘70s rock prior on Wednesday.

The winner of the $1,000 cash prize drawing will be announced at 9 p.m. Wednesday, prior to the fireworks. Tickets are $5 each and can be purchased at Veterans of Foreign Wars Post 7005, Mike’s Pizza, or at the Streetfest.

As for the fireworks, committee member Bob Harper said festival organizers have a great relationship with their provider, Hamburg Fireworks Display out of Lancaster.

The fireworks display will last 20 to 30 minutes. The rain date is July 7.

The Streetfest is a big undertaking, Harper said. The cost to put on the event is $25,000. The fireworks alone cost $12,500. The festival committee relies primarily on donations to cover the costs. The main sponsors are Veterans of Foreign Wars Post 7005 and the village of West Jefferson.

“We’re very pleased with the attendance at the Streetfest. We could use more monetary support,” Harper said.