Jefferson Local school board members gave the thumbs-up to a CRA/TIF financing agreement for new industrial development, albeit with a money-generating twist for the district.

The board unanimously approved a Community Reinvestment Area/Tax Increment Financing agreement on Aug. 12, alongside a school district donation agreement with Pizzuti Development.

The donation agreement—in the works for months as part of an effort to recoup some of the money the district loses with abatements in CRA/TIF development areas—provides the district with one cent per developed square foot of space.

According to David Harper, school board president, the funds will be released to the district “when the (village) issues an occupancy permit and notifies the district.”

Superintendent William Mullett previously said there is a misconception about the amount of taxes the district collects from West Jefferson’s industrial park TIF, which is approximately $200,000. Because of the agreement, the district also forgoes property tax for the area.

The agreement with Pizzuti is for space developed during the life of the tax abatement.

The district recently passed a resolution approving a 100 percent property tax abatement for an 840,000 square-foot speculation warehouse, which now could generate $8,400 annually for Jefferson Local Schools under the one-cent agreement.

Similar abatement legislation was passed for a 205-acre Duke site at Park 70.

In other action, the board approved filling two teaching slots—one at the middle school and another at the high school in the English department. Mullett said the positions were the only new certified hires for the 2019-20 school year.

Fireworks displays go off without a hitch 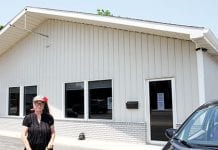