The language in the village’s current zoning code conflicts with Environmental Protection Agency requirements, according to council documents. The amended ordinance would require new developments to be constructed at least 50 feet from the centerline of all ditches, retention ponds and lake shorelines within the district.

Developers also would be required to build new constructions 110 feet from the centerline of all ravines or tributaries that run into the Darby creeks.

The new setbacks will help keep the streams healthy, according to Heather Doherty, assistant regional scenic river manager for the Ohio Department of Natural Resources, who attended the Feb. 3 village council meeting to discuss the legislation.

“Having natural areas next to creeks is really important. You can’t really separate the river from the land that’s next to it,” Doherty said. “Forests help filter runoff and pollution. They create habitats for fish. They shade the water, keep it high in oxygen. So you really can’t have a healthy stream without having a healthy forested corridor along the stream.”

In addition to filtering out pollution, Doherty said, increasing the space between new developments and the Darby creeks will allow the land to naturally absorb floodwater and protect properties from erosion.

“You kind of give the river the space that it needs,” she said. “So, it’s also a good investment in private property and infrastructure.”

Mayor Ray Martin said the village has seen lots of growth over the last several years, and some of that growth has been “imbalanced.”

“We have all this industry out here and we have nowhere for them to live, but yet we have state scenic rivers that we have to be careful about, as well,” Martin said.

The village is trying to get ahead of the curve by collaborating with partners and listening to the concerns of property owners, developers, and special interest groups as they relate to keeping the Darby creeks healthy.

“It’s all about responsible growth,” Martin said. “The thing we can do is just try to be more responsible in taking care of our natural resources, so we have them.”

Martin worked with Doherty to produce a pamphlet for developers that lists what the Environmental Protection Agency’s setback requirements are and what the Ohio Department of Natural Resources’ State Scenic Rivers program recommends to ensure adequate stream health.

The new setbacks in the amended ordinance are included as recommendations in the pamphlet which can be obtained by visiting the mayor’s office.

Martin said that after 30 days, the amended ordinance will be accepted and incorporated into the zoning code. 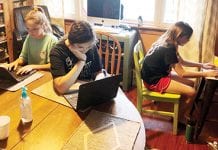