Wedgewood Middle School student Aleena Thaboune lost a friend to suicide. She did not know her friend suffered from depression. Thaboune decided to learn from her experience and help others who may also be suffering in silence.

Thaboune, along with Wedgewood students Carter Robinson and Tajonae Hairston, were selected to head up the middle school’s Service Above Self project, sponsored by Columbus Rotary. To better understand depression and help their peers, the students launched the year-long Wedgewood Warriors Against Depression initiative with the help of school counselor Brianna Lohse.

As part of the initiative, the students made their peers buttons with reassuring messages and launched a bullying prevention campaign.

“All the students signed the bullying prevention promise,” said Lohse. “We also have a kindness tree displayed in the school’s hallway.”

The students were even able to bring in representatives from the National Alliance on Mental Illness to speak to other students.

Thaboune, Robinson and Hairston began working on this project in October. On March 20, they presented their community service project to Rotarians, community members and Columbus City Schools District staff including Superintendent Dr. Talisa Dixon and Board of Education President Gary Baker as part of the 14th annual Service Above Self fair. Teams from 24 district middle schools presented their projects and the Wedgewood Warriors Against Depression project was named one of the top three projects.

The students will now compete against teams at the high school level on May 13.

For the Wedgewood Middle School students, it’s not just about winning the district prize. It’s about helping others.

“I’ve learned that depression can affect anyone,” said Robinson. “If I see someone who seems sad, I go and ask them if they are alright. I think we have helped a lot of people.”

Robinson said one of his main goals is to stop bullying. The eighth grader said he has witnessed instances of verbal abuse in his school.

“People don’t realize the effect of their words,” said Robinson. “They don’t know the daily struggles (of the students they are putting down).”

Wedgewood Principal Diane Campbell said this project was motivated by the students and it is relevant to the issues young students face today. She said the three students chosen to spearhead the project were picked for a reason. According to the principal, Thaboune was selected for her ability to recognize other students who need support. Robinson was picked because he is “a true gentleman who is always willing to help.” Hairston was selected to take part in the project because she is respected by her peers and teachers.

“I am very proud,” said Campbell. “We have kids helping kids and that becomes contagious.”

According to the National Alliance on Mental Illness (NAMI), one in five children ages 13-18 have or will have a mental illness and suicide is the third leading cause of death in youths ages 10-24. The group also says that 37 percent of students with a mental health condition age 14 and older drop out of school.

NAMI is the nation’s largest grassroots mental health organization and it is dedicated to building better lives for the millions of Americans affected by mental illness. For more information on the organization and/or warning signs of depression, visit www.nami.org.

The Columbus Rotary Service Above Self project was created in 2003 and it aims to make a positive difference in the lives of others while reinforcing community service and civic engagement. 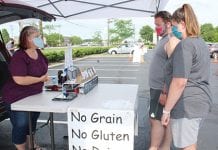 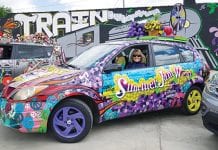