After Cory Coburn resigned from council last month, the village needed to appoint someone to fill his seat on an interim basis until the November election. Warner was the only person who expressed interest in the position. Council approved her appointment at their Sept. 8 meeting.

Warner also was the only person to submit petitions to the Madison County Board of Elections to run for election to fill the remaining two years of Coburn’s term, which expires on Jan. 2, 2018. She will run unopposed in Nov-ember unless other individuals declare themselves as write-in candidates.

As for why she is interested in serving on council, Warner said, “My kids are grown, and I’ve been looking for something to get involved in. I want to help West Jefferson stay a good place to grow up and raise kids in.”

Warner graduated from West Jefferson High School in 1979. She handles parts ordering and trailer maintenance for Target’s food distribution center in West Jefferson. A couple of years ago, she served on the village’s charter review committee.

Warner inherits Coburn’s committee assignments, which include serving on the finance and police committees and chairing the employee benefits committee. Her first council meeting will be Oct. 5.

“I look forward to working with every-body. I hope I can make a difference,” she said.

Councilman Steve Johnston wants council to take a hard look at what it can be doing when it comes to development.

He noted that the Ohio Department of Transportation is conducting a Route 42 access study with a management meeting set for Sept. 22. He also noted that the Madison County commissioners are putting in water service at Route 42 and I-70 in hopes of further developing the Route 42 corridor, both toward London and West Jefferson.

Regarding actions by the county and state, Johnston said, “I feel like we’re sitting by the side of the road and watching them rob us of (development opportunities).” He also said the county’s comprehensive plan is “scary” as far as West Jefferson’s interests are concerned.

He requested that council set a work session to seek development advice from Sean Hughes, development director for the city of Delaware and former Madison County Chamber of Commerce director.

Johnston said Hughes has more experience and works in an area of high development. He also noted that Kell is paid by Madison County.

Council agreed to set the work session and will contact Hughes to set a date and time.

Choice One Engineering will conduct a pavement rating study for all of the streets in West Jefferson, except state routes 29 and 142 and U.S. Route 40. The cost of the study will be no more than $9,500.

“They will rank the streets and determine best condition, worst condition,” said John Mitchell, public service director for the village.

The study will make recommendations based on pavement conditions, traffic volume and costs. The village can use the information to determine which streets need to be resurfaced, repaved or reconstructed and in what order over the next 20 to 25 years.

“This will be a good budget tool,” Mitchell said. “It will take somewhat of the ambiguity out of the decision-making for us.”

In other action, council appropriated $185,000 for the purchase of approximately 25 acres of land adjacent to Converse Park. The money comes from the village’s park development fund, made up of fees paid by developers in the Route 29 industrial park.

“(The land purchase) is for the future development of the parks in West Jefferson,” Garver said. “Council thought it was a good time now to lock it in for the future.” 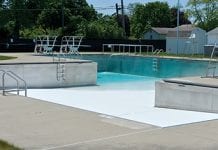 Ham, Mister and Sassy are up for adoption