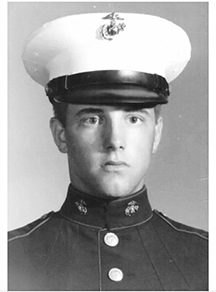 Edward Bristle of Grove City was honored with other Ohioians on June 19 at the Vietnam veterans memorial fund memory ceremony.

More than 500 Vietnam veterans, including 34 from Ohio, were inducted into the Vietnam Veterans Memorial Fund’s (VVMF) In Memory Program in 2022. Since the Vietnam War ended, thousands of Vietnam veterans have suffered due to Agent Orange exposure, PTSD and other illnesses as a result of their service. VVMF believes all those who served in Vietnam should be honored and remembered for their service. The In Memory program enables the families and

friends of those who came home and later died the opportunity to have them be forever memorialized. ​​​​​​​

On June 18, VVMF hosted the 2022 In Memory ceremony on the East Knoll of the Vietnam Veterans Memorial, where each honoree’s name was read aloud.

“For many Vietnam veterans, coming home from Vietnam was just the beginning of a whole new fight. Many never fully recovered, either physically or emotionally, from their experiences. As these veterans pass, it is our duty and solemn promise to welcome them home to the place that our nation has set aside to remember our Vietnam veterans,” said Jim Knotts, president and CEO of VVMF.

The plaque that honors these veterans was dedicated as a part of the Vietnam Veterans Memorial site in 2004. It reads: “In Memory of the men and women who served in the Vietnam War and later died as a result of their service. We honor and remember their sacrifice.”

VVMF has created a personal remembrance page for each honoree online in the In Memory Honor Roll at www.vvmf.org/honor-roll. Their photos will also be displayed around the country when VVMF’s mobile exhibit, The Wall That Heals, is on display in an honoree’s home state.

The In Memory program was created in 1993 and has since honored more than 5,600 veterans.

For more information on the In Memory program or to apply to have your loved one honored, visit vvmf.org/inmemory.

Wattle helps to raise more than $30,000 for food pantry

Initiative aims to brighten the holiday for Ohio inmates