Home Southwest Messenger Trustees to cut back on spending

Jackson Township’s financial plight came up before trustees as they decided what projects to fund.

At a recent meeting, trustees agreed to reimburse the firefighters for costs incurred in putting on Safety Town this past summer, but rejected a township donation to help the Central Crossing Navy Junior ROTC in paying its way to Hawaii for Pearl Harbor observances.

“I can’t see asking the taxpayers for more money and then use our money to send kids to Hawaii,” said board chairman David Burris. “I’ll vote for funding Safety Town because we’ve always done it,” he said.

The fire levy, the first in more than 20 years, was necessitated by the financial situation. Changes in state laws have meant less money flowing into the township which is facing higher expenses. Approval of this levy would mean the township could use money in the general fund for other purposes and the fire department would be able to perform some much-needed and delayed repair work.

Safety Town is a project put on by the firefighters and Grove City police each summer to teach children some safety practices. The township historically covers expenses after going over the bills from the week-long program.

However, the Central Crossing students were not left out in their quest to meet the obligation of $93,000 to send 40 NJROTC students to Hawaii to participate in the Dec. 7 observances of Japan’s attack on Pearl Harbor that got the United States into World War II.

Central Crossing is one of four units from across the country to receive an at-large bid to participate in the parade to commemorate that day in 1941. Eight other units will also be going, but they represent states named for battleships attacked in the harbor that day.

Trustees opened their own wallets for a personal donation to help the students who have raised some $73,000 toward their goal.

The township is also hosting a Flexible Spending Accounts enrollment and benefits review for all township employees on Nov. 5, 10, 12 and 17 at Fire Station 202. This event will give employees the opportunity to talk with various insurance and benefits providers.

In other news, Township Administrator Mike Lilly said the recent Fall Clean-Up Day drew 400 vehicles with more than half of them having items to be shredded. He said that the shredding portion of the event keeps growing each time. Ninety people brought items for shredding the first time it was offered in May 2010 and this time 203 people had items for shredding.

Since the Clean-Up Day began in October 1996, 8,314 vehicles have passed through the gates, with 3,510 old tires being collected and 1,386 people bringing items for shredding. 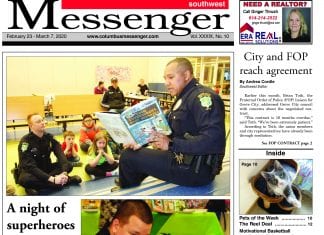