It was the early 1980s and the leadership at Trinity United Methodist Church in Lilly Chapel had a grand idea.

For the benefit of the entire community, they wanted to establish a homecoming event complete with a parade and a day full of fun for children and adults alike.

They pictured small rides, games and craft areas to keep the little ones entertained. They envisioned people feasting on homemade goods and clamoring to buy other delectable treats.

They heard local bands marching down the street and the sound of thrown candy hitting the pavement, and they saw a worthy man, woman, or child become the face of the event as the parade grand marshal.

Even though their burg is small compared to surrounding municipalities, they knew it would be a monumental task to pull off their homecoming plan.

Believing in the heart and skill of their parishioners, the leadership asked for volunteers to help get the idea off the ground. Among those who responded were Bettylu Timmons, her husband, Dale, and her sister, Floanne Wilson. 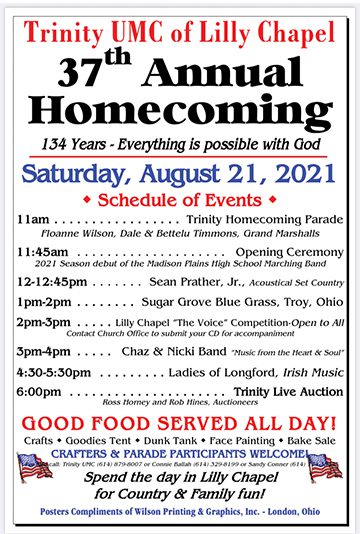 The trio, along with Wilson’s husband, Brad, had been attending the church since the 1950s and could scarcely say “no” to the church leaders’ request for assistance.

“They had always been the kindest people, and we wanted to do something to return the favor,” Floanne said.

While Dale donated bushels of corn and other produce from his farm in London, Bettylu and Floanne took charge of some of the baking and cooking.

“We made the pies and helped prepare the chicken and noodles,” Bettylu explained.

They didn’t just go to the store and purchase these goods; they handmade them.

“I remember walking through the front doors of the church as homecoming day approached and seeing a number of tables spread throughout, all filled with their handmade noodles drying on them,” said Kathy Connor, the church’s current treasurer.

She said she also remembers how the legend of those noodles grew as time went on.

“Everyone wanted those noodles,” Connor said. “I tried to sneak a few [during preparation] but always got my hands smacked by someone for trying it.”

Bettylu, 86, and Floanne, 88, only recently scaled back their homemade tradition when it became difficult to keep up with the demand.

“We buy most of the items now,” Bettylu said, “but we’re still here every year helping to prepare.”

Dedication to the homecoming parade and festival, now in its 37th year, is just one of the reasons the church leadership wanted to recognize the trio.

Months before the homecoming had an official date for this year, Connie Ballah, a longtime member of the planning committee, was thinking of candidates for parade grand marshal.

She knew the committee wanted to choose someone local, and possibly even a member of the church, but she wasn’t sure who would be right for the role. As she scanned the church during services one day, her eyes kept straying to Dale, Bettylu and Floanne.

“We all know how much good they do in this church and for the community,” Ballah said, “and I thought any one of them would be a great grand marshal.”

A problem the committee ran into was which one of the three to select.

“They are always together,” Ballah said. “So, we figured why not just select all three of them to be our grand marshal.”

Then the committee wondered if the three would agree to participate.

“They are the most humble people you will ever meet,” Ballah said. “I wasn’t sure they would even accept this nomination.”

Bettylu said they decided to accept because they thought it would be “fun.”

“It isn’t every day someone asks you to do something like this,” she said, adding it will be nice to represent their beloved church and their equally beloved community.

“We couldn’t imagine being anywhere else,” she said.

Raised “just a few miles down the road,” Bettylu and Floanne Yearling raised animals and sewed clothing as members of the Fairfield Darts 4-H Club. They did not take a liking to the latter.

“We never did much sewing after that,” Bettylu said.

“Yes, that was quite enough,” Floanne agreed.

In childhood, they met Dale Timmons and Brad Wilson, who would later become their respective husbands. All of them graduated from Fairfield School between the late 1940s and the early 1950s.

Floanne and the late Brad Wilson married in 1952 and had four children–Bill, Diane, Mike and Cathy. Bettylu and Dale married in 1953 and had three children–Doug, Joy and Rick.

While Dale farmed in London and Brad became a dental technician after serving in the U.S. Army, Bettylu and Floanne worked at The Bell Company. They say they never got tired of spending so much time together.

“Not at all,” Bettylu said.

Upon retirement, they dedicated more time to their church and their grandchildren and great-grandchildren. They enjoy attending the kids’ sporting events and claim they do not have hobbies.

“Those go kaput when you get older,” Bettylu said.

Though she and Dale love spending time in Florida during the winter season, Bettylu said they have never considered making it their permanent location.

Connor said the community and church feel blessed for that fact.

“They are the most wonderful people, and we are so pleased to have them all serve as our grand marshals,” she said. “I think it should have happened a long time ago, but I am just thankful they are finally being recognized for all the good that they do and for the good people they are.”

Anyone interested in The Voice contest is asked to contact the church office to submit a CD for accompaniment.