While there are no real positives to be found with the temporary closure of movie theaters, a small beacon of light has been the increased access to independent films through on-demand or streaming services. Living in a smaller media market often means their release plays second, or third, fiddle to big studio releases so having them come right to your computer or television screen has been a pleasant revelation for fans of indie cinema.

One of the indie films that had been making a lot of noise on the circuit late last year was “Babyteeth,” an Australian stage adaptation that explores teen romance and terminal illness.

Drawing praise for its acting and non-manipulative storytelling, it was set to open at small and locally owned theaters and then expand to the larger chains through word of mouth. Then the global pandemic hit and scrapped those plans.

Knowing that it could get a decent audience through on-demand and virtual screenings, it was released this past weekend and generated decent buzz online. And, as someone who ordered it for rent, I can attest that it does live up to its shortened hype.

In the film, Eliza Scanlen (“Sharp Objects”) plays Milla Finlay, a teenager who experiences her first brush with love near what could be the end of her life.

While dazedly waiting for a train home from school one day, she is drawn away from her melancholia by the presence of a strange boy named Moses (newcomer Toby Wallace) who seems to have a complete disregard for his physical safety.

Compelled to speak to the boy who almost got hit by the train, she strikes up a conversation about hair (hers is still long; his is unevenly shorn and features a rat tail/mullet combo) and remains completely oblivious to his desire to score some cash from her.

When the alarm bells do start to ring in her head, Milla ignores the sound in favor of some more time with the odd, hyperactive fellow who has scars and facial tattoos and no qualms about wearing shirts spotted with nasal blood.

While the pair are bonding through haircuts (he takes her back to his mother’s house to give her a buzz with shears meant for Bichons Frises), we meet the second couple in this movie –Milla’s mother and father, Anna and Henry (Essie Davis and Ben Mendelsohn, respectively).

Though a psychiatrist, Henry is having trouble talking about the grief he feels over his daughter’s terminal illness and has been “lightly” self-medicating as a way to cope. His wife, too, has been self-medicating though only with pills prescribed by Henry.

While slightly high from the medication, the married duo meet the potential new couple at dinner that night. Henry, having a bit more awareness of the situation, is trying to figure out why his daughter is attracted to Moses while Anna is trying to determine whether she is having a stroke. Moses, who seems to come from a family of dysfunction, is delighted by this dynamic.

When Anna really comes to, she is horrified that a 23-year-old is hanging around her still teenaged daughter and demands that he stay away. Naturally, that goes about as well as expected and eventually they come around to his presence as he makes Milla feel alive. “This is the worst possible parenting I can imagine,” Anna admits as they allow Moses temporary quarters in their home.

But the “love story” between Milla and Moses isn’t the kind that is often depicted in similar films; for the most part, Moses only hangs around Milla to steal drugs to sell and Milla, well, her motives might be deeper than attraction to a “bad boy” with a zest for living life as it comes.

Though the elements featured in this film are more serious minded, it is not devoid of humor. There are some absurd observations and scenes that will have you laughing out loud and then wondering if you should be having as great of a time watching as you are.

While “Babyteeth” occasionally stumbles into a sense of disjointedness through director Shannon Murphy’s use of jump transitioning with title cards, the script (written by Rita Kalnejais and adapted from her play) is sharp enough and the acting raw enough to propel it past the occasion missteps in telling this offbeat and original story.

Dedra Cordle is a Messenger staff writer and columnist. 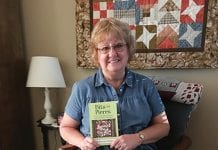 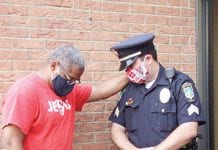 A message of unity