Home Westside Messenger Something to cheer about

It was the moment Ashley Caldwell had waited years for, a chance to show the cheerleading coaches at Pleasant View Middle School that she had what it takes to make it as a member of their team.

In front of the small audience, she cheered loud and jumped high, smiling wide though the nerves were wreaking havoc inside. When her routine finished, she thanked them for their time and said she hoped to be a part of the Panther pride.

She was not chosen to be a part of the squad that year.

It was a moment she had waited more than a year for, a chance to show the cheerleading coaches at her new middle school that she had what it takes to make it as a member of their team.

In front of a small audience, she cheered louder and jumped higher, smiling wider though the nerves and memories of disappointment was wreaking havoc inside.

Like the last time, she thanked the coaches at Norton Middle School for their time and said she hoped to be a part of the Wildcat team.

She was not chosen to become a member of the squad that year.

Ever since she was a little girl discovering the sport while channel surfing, Caldwell said she had wanted to be a cheerleader.

“I just fell completely in love with it,” she said. “I loved their skills, their smiles and their spirit. I had it in my mind that it was what I wanted to do and I was going to try my hardest to do it.”

She admitted that the rejection at the middle school level was hard on her.

“I was really disappointed,” she said. “I have had this dream in my mind for so long and it just wasn’t happening for me at that time.”

Instead of giving up, she decided to take a more active approach.

“I was going to practice, practice and practice some more until I got better,” she said.

And that is just what she did.

“She was very dedicated to improving her skill set,” said her father Anthony. “When she wasn’t studying, she was online watching cheerleading videos and tutorials, taking notes on their routines and movements.”

With more confidence in her abilities, Caldwell decided to try out for the cheerleading team when she entered ninth grade at Westland High School. She did what she did in the past – cheered loudly, jumped high and smiled through the nerves. The result, however, was different.

“I will never forget the look on her face when she told us that she made the freshman team,” said Anthony. “She was so excited and just grinning from ear to ear.”
Levon Maynard, the school’s head cheerleading coach, said she was taken by Caldwell’s demeanor and determination.

“She is someone who never gives up,” said Maynard. “She doesn’t give up on herself and she won’t let any of the girls give up on themselves either.”

She went on to earn the title of ‘Most Improved Cheerleader’ at the end of her freshman year.

Shortly thereafter, Caldwell was attending a summer camp and learned that veteran cheerleaders are given the opportunity to try-out for All-American status with the National Cheerleaders Association. If they achieve that rank at the camp, they are invited to perform in either the Philadelphia Thanksgiving Day Parade or the New Year’s Day Parade in London, England.

Caldwell said when she heard that bit of news, a new dream formed.

This summer, Caldwell – now a senior – got up in front of the entire camp and a large group of professional judges and tried out for All-American status. She performed the routine they had learned the day before.

When all of the hundred-plus cheerleading veterans had finished, the judges reminded them that they had to be very selective.

“What we are looking for in our All-Americans is not only how they perform, but how they react when they mess up and how their coaches feel about their leadership abilities,” said Mike Fultz, the international event coordinator for Varsity Spirit.

He said the organization takes the latter aspect more seriously than the former.

“We are sending them off to be ambassadors for their school, their state and their country,” he said.

Maynard said she could think of no better representative.

“When it comes to her leadership abilities, Ashley is a coach’s dream,” she said. “She always gets our practices started on time and she is always giving encouragement to others.”

She added that she was filled with pride when Ashley was selected to be an All-American at the UCA’s camp.

“We have had several girls selected at these camps but she will be the first one to actually travel to London and participate in the parade,” she said. “This will be a wonderful opportunity not only for Ashley but for our entire squad as well.”

Caldwell said though it has been months since her selection, she is still filled with excitement at the All-American selection and nervous energy as the parade date approaches.

“I can’t wait to experience this,” she said. “I dreamed of this but never thought it would come true.”

On Dec. 25, Caldwell will leave Columbus for New York City and then travel to London. There, she and 800 other All-Americans will roam the city’s famed streets, tour the city’s sites and celebrate the new year downtown with cheer.

According to Fultz, more than a million people will watch the parade live in London and millions more will watch via live stream. Among those who will be glued to the computer will be Caldwell’s family, friends, coaches and peers.

“I want to say that it is hard to believe that this is happening to Ashley but I can’t,” said Anthony. “She has faced setbacks and disappointment and judgment but she is still so determined to achieve her dreams.

“All I can say is that I am proud of the person she is, and I am so proud that she will be representing our family, our community, our school, our district and even our country in London.” 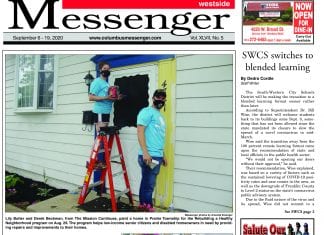