Home Madison Messenger Solid as a river of rocks

One rock is painted to look like a taco lying on its side. Another’s bump now serves as the nose on a blue-eyed face.

“The Scream,” Edvard Munch’s iconic painting, is represented in miniature, as is the notorious Marvel Comics superhero, Deadpool.

Puns have their place–an ocean scene illustrates the phrase, “Seas the Day”–as does inspiration–one colorful rock urges the reader to “Be a Rainbow in Someone’s Life.”

Altogether, more than 600 cobblestones make up the “rock river” that hugs a wall of classrooms in the courtyard outside the cafeteria at London Middle School. Six hundred small, individualized works of art come together to create one big, collective masterpiece.

The idea: To let the artists (students at the school) know they are special and they belong.

“The rocks aren’t separated by grade; they’re all mixed in with one another. It’s a masterpiece that represents them. They make it their own and then they belong in here,” said Kirsten Witt, the sixth-grade language arts and reading teacher who is coordinating the project. 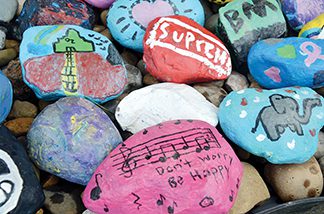 Witt saw the rock river idea online two years ago, but put it on the back burner until this past February when 17 students and staff were killed in a mass shooting at a high school in Parkland, Fla.

“I couldn’t sleep that night” Witt said. “At 3 a.m., I saw the rock river image again on Facebook and immediately thought, ‘We need to do this.’ In my mind, it was a way to unify the students.”

The first order of business was to acquire 600 rocks. Witt quickly learned that to purchase just 400 rocks, she’d need $1,000. She opted instead to pitch her project idea to quarries and sandstone companies. After many calls and few positive responses, she finally heard back from Ron Wike with National Lime & Stone out of Lockbourne.

“He asked about the idea and then he asked what the budget was. I said I didn’t have a budget. He donated the rocks,” Witt said. 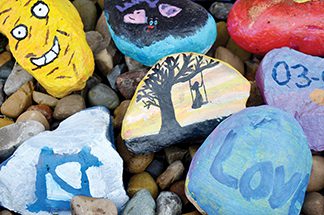 That was the start of a collaboration that involved donations from several local individuals, groups, and companies. Eric Warnock transported the rocks from Lockbourne by dump truck. The middle school student council donated decorative paint, paint brushes and other supplies. They also sorted the big rocks (for painting) from the little rocks (for the river’s base). Dwyers Bros. Hardware donated mesh ground covering, Jeff Mathewson donated edging material, and Sherwin Williams pitched in base coat paint. Ken Davis helped with landscaping, and Jeremy Porter created and installed a sign.

Each of last year’s sixth-, seventh-, and eighth-graders painted a rock of their own design and placed it in the river at the end of the school year. This year’s sixth-grade class did the same at the start of the school year and so will each incoming sixth-grade class, allowing the river to grow. Eventually, it will flow across the courtyard to the other wall of classrooms, crossing over a bridge the high school wood-working class plans to build.

“When I saw the effort that the students put into designing and painting their rocks, I was blown away,” Witt said.

A layer of protective clearcoat seals the deal, preserving hundreds of examples of thoughtfulness and creativity into a symbol and support and belonging.