Up until recently, Bryan Wade never gave hiking much thought. There weren’t a lot of trails to explore growing up in West Jefferson. As a teen, he didn’t get much of a kick out of the family outings to southern parts of the state. And as a working adult, he seldom had time to pick up a book and read about the experiences of new or experienced trekkers.

That mindset changed, however, as the credits rolled on a television screen.

It was a little over three years ago when Wade came across a film called, “A Walk in the Woods.” In the 2015 film, starring Robert Redford and Nick Nolte, Redford’s character decides to experience something new in life after attending one too many funerals and hearing one too many stories about the ailments of people his age. In an act that those close to him deemed absurd, he chooses to through-hike the Appalachian Trail as that new experience. The film is based on a 1998 memoir by Bill Bryson.

Wade started watching the film simply as a good way to pass the time. By the time it ended, he began contemplating his own “act of absurdity.”

“Something about that film just stuck with me,” he admitted.

Wade began looking up videos of people hiking the famed trail and came to the conclusion that it was something he needed to do. Unlike the experience of Redford’s character in the film, the reaction of Wade’s family was more supportive. Somewhat.

Instead of getting his trail legs cut on hikes throughout the state, Wade hit a stair-climbing machine at the gym with a 40-pound pack strapped to his back almost every day.

“I had joined a bunch of hiking groups online, and they all say that you can’t really prepare for the hike,” he said. “They said that the trail trains you and that is how you learn.”

Still, he did manage weekends of 20- and 30-mile walks, in addition to the work on the stair climber to gain more endurance.

In April 2019, he flew down to Georgia to start his four- to six-month long, 2,190-mile through-hike of the Appalachian Trail.

As a “strong extrovert,” Wade said it was hard to adapt at first. While the Appalachian Trail Conservancy estimates that more than 3 million visit the trail (which runs through 14 states) and more than 3,000 people attempt a through-hike each year, there are long stretches of absolute solitude where not a single person can be found.

“Besides getting accustomed to the long hikes with a 40-pound backpack on, that was one of the hardest aspects of the hike,” said Wade. “It was difficult to be alone with your thoughts sometimes. The silence would get in your head. It would make you ask a bunch of questions about your life and the decisions you have made. I often asked myself ‘Why am I out here?’”

After a few days on the trail by himself, Wade ran into a friend he met on an online hiking group, and they linked up for a stretch. It was fortunate, too, as his partner alerted him to the presence of a bear.

“Wes (who hailed from British Columbia) was hiking up in front of me, and I saw him startle,” Wade said. “I came a bit closer and saw the butt-end of a couple of cubs.”

Luckily, Wade did not experience the anger of a mama bear that day, or any day that followed.

In the span of a month, Wade traversed multiple states, walked hundreds of miles and ascended the trail’s highest peak, Clingmans Dome in the Great Smoky Mountains. It was shortly after that experience that an injury cut his through-hike plans short.

While descending a mountain trail in Tennessee, Wade’s leg got caught up in a tree root and brought him crashing to the ground. Grimacing in pain, Wade watched as his knee swelled and knew immediately that his journey was over.

“Once I heard that pop, I knew it was time to get off the trail,” he said. 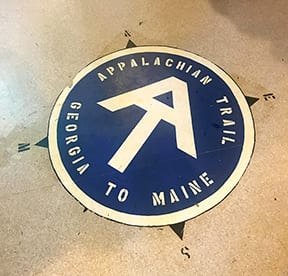 After hobbling down the trail for several miles on one good, albeit bruised, leg, Wade ran into a resident of the town of Erwin who took him to an urgent care facility. Once there, he was diagnosed with a knee sprain and told to stay off of it for several months.

Back home in New Albany, where Wade co-owns a credit card processing company, he rested up but couldn’t stop thinking about his lost chance to through-hike the Appalachian Trail. He decided he had to do it again and set his sights on a spring start this year.

This time, he said, his mother was more supportive, especially once she learned he would be taking a recently retired friend with him.

Several days before the duo was to set off–Wade with a much lighter back, and Doug Kramer with newly purchased gear–the Appalachian Trail Conservancy sent a letter asking hikers to postpone their plans due to the outbreak of the coronavirus (COVID-19). It stated concern for the hikers, the closure of popular lodging locations, and a potential strain on the local, and often rural, hospital systems.

Wade said he was disappointed when he heard the news but completely understood the request. He said that interaction–the hikers helping each other, the locals providing food and travel to shelters–is an irreplaceable aspect to the journey.

He said he doesn’t know when the conservancy will lift their request but that, in the meantime, he will continue to live with the experience of hiking a portion of the Appalachian Trail.

“It is an all-encompassing adventure that challenges you and affects you spiritually, emotionally and physically,” he said.

He said that when he was on the trail hiking through forests and valleys and across bald mountains, he had never felt so close to God.

“It was like you could hear his voice and see his work in everything,” he said.

While taking comfort in his spirituality, Wade said he has to start working on his comfort with solitude.

“I’m still not there yet,” he admitted. “That is one thing I am not looking forward to on this next through-hike attempt.”

Still, he said he looks forward to the challenge when it presents itself again and has encouraged others to partake in their own act of absurdity in the future.

Letter to the editor: No excuse for child abuse