Fundraising for a memorial paying tribute to Carol Daniels, former London Elementary School principal, is in its final chapter.

“We’ve been overwhelmed by the generosity of people,” said Sheri Spahn, a member of the committee spearheading the project. “And they’re not just writing checks; many also are sending notes saying what Carol meant to them.”

“We’ve collected enough donations to cover the cost of the monument, and now we’re looking for a little more for the finish work,” Spahn said.

Daniels worked for London City Schools for over 40 years, the last 30 as principal. She passed away on July 9, 2017, following a battle with cancer.

In December, a group of parents, current and former teachers, and community members presented to the school board the idea of erecting a lasting memorial to Daniels.

Made of red granite, the memorial is taking the shape of an open storybook that stands six feet tall and five-and-a-half feet wide. It will sit at the northwest corner of the elementary building, near the flag pole.

The stone was delivered a few weeks ago to Roby’s Memorial Design and Lettering in London, where the customized etching will take place. 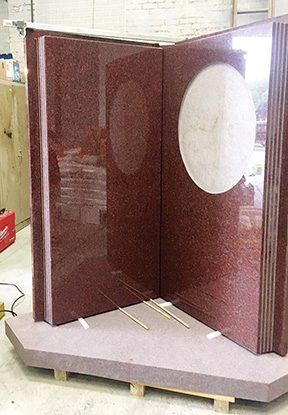 “The red granite is just beautiful,” said Spahn, who visited Roby’s with other committee members after the stone arrived.

Spahn said the committee hopes to raise another $2,000 for finishing touches around the installation, including a concrete platform for the stone to sit on, landscaping, lighting and a bench.

Installation will take place on Sept. 11. The public is invited to the official unveiling set for the evening of Sept. 12. An assembly for students is slated for Sept. 13, Carol’s birthday, also known at the school as Lemonade Day. One of Carol’s favorite sayings was, “When life gives you lemons, make lemonade.”

Donations may be made out to “London City Schools” and mailed to the attention of the Treasurer’s Office, 380 Elm St., London, OH 43140. Donors should write “Carol Daniels Memorial Project” in the check’s memo line.