Bring the Women’s NCAA Final Four basketball championship to town. Add the expertise of an international nonprofit organization. Stir in the generosity of a well-known shopping destination. It means a pair of new shoes and socks for students at Prairie Norton Elementary School.

All these ingredients came together March 22 when the Samaritan’s Feet organization worked with Wal-Mart to provide new shoes and socks for the 604 students at the school which serves pre-K to fourth graders.

“We like to do events like this all around the world,” said Samaritan’s Feet spokesman Craig Gibbs, adding that most of the events are surrounding big sporting events. Columbus will host the Women’s NCAA Final Four basketball championship March 30 through April 1.

Children were all smiles as they went through the line to get their new footwear.

Students had been asked the type of shoe they wanted and measured for shoe size. This was written onto a wrist band so the Wal-Mart volunteers could get them the proper and preferred shoe.

“Most asked for running shoes,” said Gibbs. “And some parents asked if their child’s shoes could be given to someone who really needed them.”

Big boxes of shoes were lined up and almost overflowing against the back wall of the gym.

Children came to the gym by classroom and were greeted by Wal-Mart volunteers. They chatted with the children as they led them to another volunteer who was waiting with a pan of warm water to wash their feet. Washing the feet is one way the humanitarian aid organization shares a message of hope and love, especially to people without shoes. It was founded by a man from Nigeria who didn’t have a pair of shoes until he was 9 years old, Gibbs said.

Its headquarters today are in Charlotte, N.C.

After washing their feet, the volunteers dried them with a soft towel whose sheets from the roll can be disposed after a single use. By that time, another Wal-Mart volunteer had checked the wrist band and found the requested pair of shoes and a pair of socks. The foot washer then slipped the socks on their feet.

“Oooh,” said a giggling Payten Locke, a second grader, who got a pair of brilliant orange socks with bright purple toes put on by volunteer Loismarie Dent. They seemed to match her gray shoes with bright orange lining and matching shoe laces.

Payten’s smile widened as she picked up the shoes she wore to school and put them in a plastic bag to take home that afternoon.

Chairs had been set up facing each other across the length of the gym. The children started arriving in the gym at 8:30 a.m.

An hour or so later, Principal Mike Gosztyla, looking through a box of shoes, said “It looks like we’re going to get through here quicker than we planned,” noting that the fourth graders were beginning to line up at the door to the gym.

“It’s such a gift to have Samaritan’s Feet and Wal-Mart provide new shoes and socks for our children. This is a wonderful example of how a community cares for its students,” Gosztyla said. 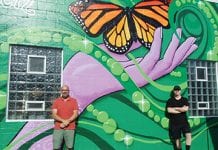