Residents of Westside neighborhoods may have noticed a greater police presence on bicycles this summer.

That’s because a program that has the goal of building stronger and safer neighborhoods has expanded to include the Greater Hilltop area.

Safe Streets, proposed by the Fraternal Order of Police and the NAACP, began as a pilot program in the Linden area last summer. In addition to the Hilltop and Linden areas, the program now serves Franklinton and the Parsons Avenue corridor.

As part of the initiative to reduce violent crime in the community and build better relationships between residents and the police, officers primarily are assigned to bicycles to encourage more citizen-officer contacts.

“The general framework of the Westside Safe Streets initiative is founded on the principle that officers need to develop relationships with community members in order to ascertain what crime issues plague certain neighborhoods,” said Sgt. Fred Brophy, who is helping coordinate the program on the Westside with Sgt. Eric Houser.

A survey conducted prior to the program’s implementation determined that the largest crime concerns of the Westside neighborhoods were violent crime, prostitution and drug abuse, Brophy said.

By documenting these crime concerns and any observations, and matching them to records on crime mapping software, officers were able to begin focusing their efforts in the Safe Streets program on these high crime incident locations.

“The officers are encouraged to utilize problem oriented policing practices, in which the causes of the crime are targeted to eliminate the underlying causes of crime – not just make arrests,” Brophy said.

“The ability for teams, such as our Safe Streets program, to take this to the next step by giving our officers the freedom to work upon the causes of crime in conjunction with the citizens of the community allows us to make true impacts upon the lives of the persons and communities we serve,” Brophy said.

This summer, the department has seen a decrease in serious crime rates when the Safe Streets officers work, he said.

“Residents have expressed both gratitude for seeing the officers on bikes in their neighborhood and an increase in the sense of safety within their community,” he said. “The high visibility presence of the officer has reduced the fear of citizens to be out and enjoy their neighborhoods.”

“This face-to-face interaction allows the officers to get to know and work with citizens who live in these neighborhoods to help resolve long misunderstood crime problems at the ground roots level,” he said. “The citizens benefit by getting to know the officers as persons who are dedicated to service of these communities.”

The end result, he says, is that the police officers become members of the communities.

“This integration of citizen-police cooperation, when matched with problem oriented policing methodologies, is the most successful manner to solve crime problems in the long term.” 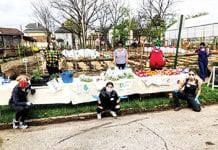