Grove City Council approved a rezoning plan that would clear a path for apartments.

At the Nov. 18 meeting, the majority of council voted to rezone approximately 21 acres of land at the southwest corner of Holton Road and State Route 104 from single family to planned use development. This action would allow Treplus Communities to move forward with Sugar Maple Commons, a proposed 105-unit apartment community for those 55 and older.

“This is not a typical apartment building,” said Aaron Underhill, an attorney representing the developer.

According to Underhill, the proposed luxury apartments would be more like condominiums.

“It’s a good use for the property and it’s ideal for the city’s changing demographics,” said Underhill.

The attorney also said because the units would be rented to senior citizens or empty nesters, there would be less of an impact on the school system and traffic.

Not everyone in attendance agreed with that sentiment.

“It’s not compatible with the surrounding area,” said Sherron. “It should remain rural.”

Located near Scioto Grove Metro Park, Sherron said a conservation area or more park space would be a more appropriate use of the property.

Other residents and one council member said they were concerned about added traffic on an already busy state route.

Councilman Ted Berry, who voted against the rezoning ordinance, said State Route 104 is a dangerous road that already backs up at peak hours.

“This would put another few hundred people on 104,” said Berry who also noted that a planned housing development (Farmstead) further down the route would add hundreds more on the road. “State Route 104 is a country road that would cost a fortune to upgrade.”

Berry said he is not opposed to the development, he just does not like the location. He said he would rather see it in the core of the city.

The rest of council voted in favor of the zoning change.

Councilwoman Christine Houk said the infrastructure does need attention but said the city must commit to diversity in housing.

“We don’t want to cut ourselves off from growth,” she said.

Councilman Roby Schottke said many older people want to rent and this provides for that.

“We need high end rentals for older citizens,” he said.

According to the Grove City 2050 planning guide, that area was not recommended for apartments.

Kyle Rauch, the city’s development director, said even though it is high density zoning, the impact on the area would be less due to the age restriction in the apartment units.

The legislation approved by council was a zoning change. The developer would still have to come before council with a development plan for approval. To learn more about the project, visit www.grovecityohio.gov. 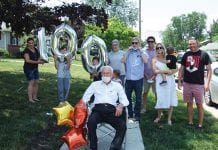