The roar and blur of fast race cars speeding around the track at the Columbus Motor Speedway were once familiar sites and sounds on the south end of Columbus.

From 1946 to 2016 the speedway, with its one-third mile track, operated just south of Williams Road near Obetz. For much of its history it was led by the Nuckles family and was home to a variety of motorsports races including motorcycles, coupes, and stock cars. It also offered stock car shows, school bus races, and thrill shows.

After the speedway ceased operations, the village of Obetz purchased the site which has since become Fortress Obetz, an athletic and concert facility.
Columbus resident and racing historian Mike Garrepy has captured the history of the race track in his new book, “Columbus Motor Speedway,” published by Arcadia Publishing. The book contains 127 pages of photos and text on the history of the track.

The book shows how the models and styles of racing vehicles changed over the decades of Columbus Motor Speedway’s operation from home built vehicles to modern custom built race cars. Also of note is how, as time wore on, the speed and power of the vehicles increased and how the level of safety gear worn by the drivers evolved.

I interviewed Garrepy about his book:

Why did you decide to write the book and why are you interested in the Columbus Motor Speedway?

Mike Garrepy: “The reason for the book is simple: to preserve the history of the track in written and pictorial form and to provide a place where fans and drivers could return to recall some of the great times each had. Not to make it all syrupy, but for many drivers race nights made them something special, especially if they won. Come Monday morning they went back to body shops, garages, driving trucks, building roads or whatever, but on race night they were the star of the show. I hope I preserve that in some way.”

What set the Columbus Motor Speedway apart and made it special compared with other race tracks?

MG: “It wasn’t just one thing, but rather a combination of things. First, if a fan wanted to see racing on asphalt in the Columbus area, Columbus Speedway was the only option unless they wanted to travel. The Nuckles family did not exploit this. They kept the facility clean and fresh looking with repairs and paint as needed. They invested heavily in new buildings with flush toilets and concession stands. Repairs were made quickly. The grass was cut prior to race night, the shrubs clipped, the PA system worked and an extensive lighting system was installed. In later years the pit area was paved – not something all tracks have. They promoted upcoming events heavily to build excitement. They kept admission prices reasonable and generally finished around 10 p.m., which means the younger fans would still stay awake. These are all things many other tracks either missed or ignored.” 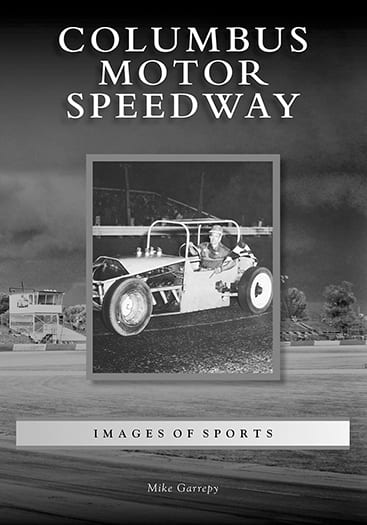 Do you have a favorite car and driver who competed there? Why are they your favorite?

MG: “If I had to name a driver as a favorite, it would be the late Dale Pyle. In his last months of his life earlier this year, I spent every Thursday afternoon for three months with him as morphine was injected to ward off the pain of his cancer. His insight and understanding of racing and a driver’s mentality allowed me to see the sport in a different light. It was as if he co-wrote the book.”

Why do you think the speedway thrived for so long?

MG: “Because the Nuckles family understood that racing, especially on a local level, was and is an ‘event.’ It is entertainment for the folks who toil in the work-a-day world and are looking for something to take their minds off Monday morning.”

What are your thoughts about the demise of the speedway and what has been lost to the community now that it is gone?

MG: “It is sad on so many levels. Besides cars going around in a circle, racing is also a social event. When a track closes folks lose contact with the friends who they have parked next to or sat next to for many years. Many people I have interviewed said they miss seeing their at-the-track friends as much as the racing itself.”

Where can people purchase your book?

MG: “Contact me at Mike.garrepy@gmail.com, contact the publisher at Arcadiapublishing.com or see us at one of our meet and greet events. Each greet is detailed on the Facebook page ‘Columbus Motor Speedway Gone but Not Forgotten.’ I will also have a display at the Piqua Mall’s Race Car show on March 22, 23 and 24.”