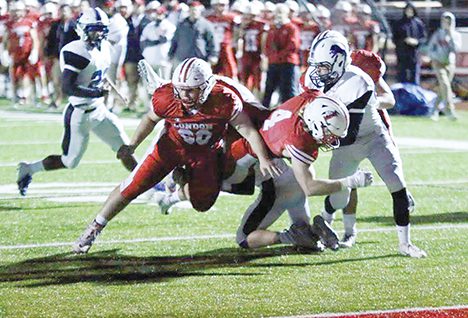 Brennen Spiess (#4) dives for the goal line to score one of his four touchdowns in London’s 56-0 victory over Bexley on Oct. 19. He is escorted to pay dirt by London guard Nick Schooley (#60).

London led 49-0 at halftime; the team’s reserve players played the entire second half under the running clock rule.

In the first half, K.J. Price rushed for 192 yards and three touchdowns, while Brennen Spiess rushed for 119 yards and four touchdowns. Antwaun Burns raced for the final score on the first play of the second half. Burns led London’s defense with seven tackles. Thad Huff added six tackles and Joey Dulin chipped in five.

On Oct. 26, the 9-0 Raiders will travel to the 8-1 Whitehall Rams for the season showdown and the Mid State League Ohio Division championship.