Cahill, who served as head coach for eight years, submitted his resignation on April 26. In it, he stated, “I made the decision to resign to spend more time with my family. I am very thankful to all my players and assistant coaches who helped build the program the right way over my eight years as head coach.”

Board members and Superintendent Gary Chapman did not comment on what led to Cahill’s decision to resign. Some of the individuals who addressed the board about the issue mentioned allegations that Cahill bullied or hazed student players.

The eight individuals who addressed the board spoke in support of Cahill. Among them were several players, including junior Connor Reed, who circulated a petition on which he collected 354 signatures of students and parents who wanted Cahill to continue coaching. He said he considered Cahill to be not just a coach but like family.

“Coach Cahill never gave up on me, and I’m not going to give up on him,” Reed said.

Scott Heiss, a basketball coach at the junior high, said Cahill had an open-door policy for practices and that he never saw Cahill bully players in practices. He asked the board if the district has a policy they follow when accusations are made against a coach and said that those accused should have a chance to defend themselves.

School board president Steve Votaw thanked everyone who spoke for their input and added, “but we have to look at the whole picture” and “do what’s best for our students overall.”

Board members met with Cahill in closed session for 75 minutes at the end of the board meeting, after which they voted to accept his resignation.

The day after the meeting, Votaw issued the following statement:

“The board was very impressed with the public comments made at last night’s board meeting, especially by our students. Decisions like this are extremely difficult, and the board must look at many factors when someone’s position is at stake…

“I fully understand the support of Mr. Cahill and respect that support. We know you are not pleased with the decision, but we hope you understand that we made this decision with very careful consideration. After hearing those compelling comments from our students, we could not make this kind of decision without serious deliberation. We firmly believe that Mr. Cahill was treated fairly and with respect, but we need to move forward. We hope you will continue to support our JA boys’ basketball program.” 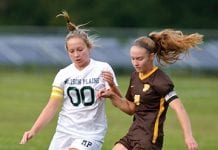