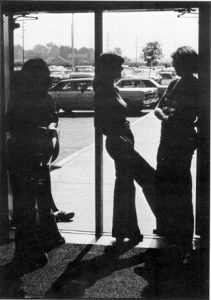 Sometimes a photo just grabs you and sticks with you.

So it is with me regarding this artistic 43-year-old black and white photo (see photo at right) that appeared in Groveport Madison High School’s 1974 Madisonian yearbook. (Editor’s note: I graduated from the school in 1974).

The photo shows a small group of female Groveport Madison High School students in silhouette as they stand leisurely in a doorway that leads to the school’s parking lot.

“I’m almost positive it was Mike Hughes who took that photo,” said Beth Massara Bogedain, who was one of the Madisonian editors in 1974. “Mike frequently humored me and took pictures I insisted would be perfect even though they were staged. Mike had a natural eye for candids and was right on target with his ideas every time. He took a lot of pictures even though he wasn’t an official photographer for the yearbook.”

At first glance it’s a simple photo that is framed by the door itself, but to me there’s a lot to see in it.

Though the sun shining through the door places the girls in silhouette, the shadows accentuate the early 1970s fashions of their clothes and hairstyles. Their stances are friendly and relaxed. It’s a common, casual moment forever caught in time.

Beyond the girls in the photo, you can see a parking lot filled with 1970s and late 1960s cars of all kinds. Most of the cars the students drove were used cars, some with mufflers held in place with coat hangers to keep them from dragging. No matter the condition, these vehicles were prized for the freedom of movement and possibility they promised.

Looking further into the background of the photo a farm can be seen in the distance. Unlike today, there are no large warehouses or commercial buildings surrounding the school in 1974. Just farm land and the distant tree line of Blacklick Creek. It was a rural high school in those days, now it is a school enveloped by an industrial district.

The door where the girls are standing was one of two entry doors on the south side of the school facing the parking lot. Groveport Madison High School has many, many doors all around it, most seldom used. Plus, while there are doors on the front of the building, the school has no obvious main, grand entryway. It was the two south side doors by the parking lot that were most often used by people coming and going from the school. These doors were gathering spots where students would congregate to catch some sun, wait for rides and before wandering to and from their cars. At these doors the students would hang out, talk, and joke around.

Bogedain said the idea for the picture came to her as she was walking toward the high school cafeteria one day.

“Every day at lunchtime, girls would stand in that same doorway,” said Bogedain. “The song lyrics to ‘We May Never Pass This Way Again,’ by Seals & Croft, popped in my head as soon as I saw them. My thought was once we graduated we will never pass through that door again as students. How different will our lives be after graduation? What will life be like when we return to GMHS? I did a lot of thinking that year about the future and how much I would miss my classmates after graduation I wondered if we would stay close.”

Bogedain thought the scene would make a great picture to match with the song’s lyrics.

“I first asked Tammie Kaser to pose looking out the doorway,” said Bogedain. “She reluctantly agreed, but it took some convincing. Yearbook editor Kenny Stevenson and I were thrilled when we saw the picture. However, the yearbook photographers and Mike Hughes, with their the artistic eyes, insisted we had to have the angle with the shadow effect. Of course, the photographers were right so I had to put both pictures in the yearbook. The girls in the photo were juniors at the time and Tammie was graduating a year early with us so I decided to use Tammie’s picture with our senior class song, ‘We May Never Pass This Way Again,’ on another page.”

To me, the door in this photo serves as a sort of time portal where the past, present, and future intertwine. Countless students have used this door. They enter and leave the school daily through this door until one day they leave through it and no longer return. They pass through the door into their futures.

In 2018, the approximately 50-year-old Groveport Madison High School will be demolished as a new school is rising to take its place. Informal gathering spots like the door in this photo will rise up in the new building just as they did in the current building.

Often when people think of their old school it is the big memories of plays and concerts on stages, games on the courts and playing fields, and academic triumphs in the classrooms and labs that surface at first. But the small memories, such as a group of girls gathering at a school door on a bright, sunny day to just hang out, may be the memories that are the most meaningful.

Rick Palsgrove is editor of the Southeast Messenger.