The new Wedgewood  Middle School, located at 3800 Briggs Road, is one of ten new buildings in the district that opened in the 2007-08 school year. The facility opened its doors to students Jan. 7. 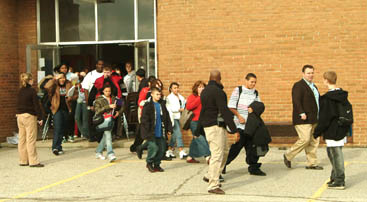 A group of eighth-grade students make thier way from the old building to the new one.

Students at Wedgewood Middle School learned the true meaning of “Out with the old, in with the new” on Jan. 7.

Students began their day like any other. They arrived at 3771 Eakin Road, the same place they’ve spent their days the entire school year. Just before the end of the school day, however, they packed up and left – for good.

Fortunately, they didn’t have to go far. The students gathered their things and made the journey next door to 3800 Briggs Road, the site of the new and improved Wedgewood Middle School.

One of 10 new Columbus City School buildings opening in the 2007-08 school year, the new building sets on the same property as the old, but sits behind it, facing Briggs Road.

At 87,183 square feet, the new two-story structure can hold 600 students and dwarfs the previous building, which is a much smaller 69,430 square feet.

The Briggs Road location also has several safety and security features that weren’t present at the previous location, including video surveillance.

Sure to be student’s favorite improvement, however, is the air conditioning.

The project, which began in the summer of 2006, cost the district an estimated $12.5 million, 30 percent of which will be reimbursed by the Ohio School Facilities Commission (OSFC).

If the district decides to go against OSFC regulations, they are not reimbursed for the project.

The original Wedgewood Middle School now sits empty, although it still has heat and electric, and security measures are still being taken. It will be temporarily used as a “swing space” for students to relocate while new facilities are built. Once the district has completed its construction phase, the facility will be torn down.