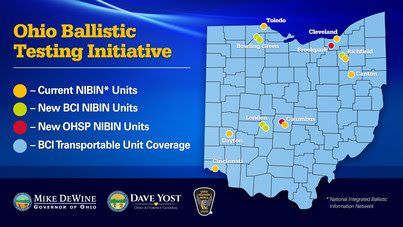 The announcement took place at the Ohio Bureau of Criminal Investigation (BCI) in London.

As part of the new Ohio Ballistics Testing Initiative, the Ohio Department of Public Safety’s Office of Criminal Justice Services will award a total of $10.5 million to BCI and Ohio State Highway Patrol to increase the number of National Integrated Ballistic Information Network (NIBIN) units in Ohio from seven to 16.

“We must do more to hold accountable the small number of dangerous criminals who are responsible for most of the gun violence in our state–the convicted felons who have lost their right to possess firearms, yet they continue to carry and use guns to hurt and kill people,” DeWine said.

“By more than doubling the number of NIBIN units in Ohio, we’ll give our local law enforcement partners easier access to this crime-solving technology to help develop investigative leads that result in arrests. With the help of this initiative, we are confident that more gunmen will be brought to justice, future shootings will be prevented, and lives will be saved.”

Firearm forensic scientists use NIBIN to analyze microscopic markings on bullets and shell casings associated with criminal investigations and compare them to firearm evidence connected to other crimes. A match indicates that the same firearm may have been used in multiple shootings, and law enforcement can use this information as an investigative lead.

“Every bad guy’s gun tells a story, and that story leads back to the bad guy. But it takes science and data and technology to be able to read that story,” Yost said. “Today’s initiative means more bad guys in prison, where they belong, and fewer guns where they don’t.”

The OSHP, which currently outsources its ballistics testing to other Ohio labs, will begin testing all of their own evidence with two new NIBIN machines located at the Ohio Department of Public Safety headquarters in Columbus and at the OSHP Cleveland District Headquarters in Brookpark. As part of this initiative, OSHP also will accept firearm evidence from local agencies for testing free of charge.

“By bringing NIBIN technology in-house at the Ohio State Highway Patrol, we’ll take some of the testing burden off other labs so that scientists can focus solely on local cases,” Fambro said. “We’ve had great success using NIBIN to connect illegally-possessed firearms found during our traffic stops to gun violence cases in communities throughout the state, and we expect more positive results when the initiative is fully underway.”

The initiative’s grants are funded through the American Recovery Plan Act (ARPA). In December, DeWine and the Ohio General Assembly dedicated $250 million in ARPA funds to first responders to help them address various pressing issues exacerbated by the COVID-19 pandemic, including an increase in violent crime. In addition to the Ohio Ballistic Testing Initiative, this funding will be used to support local law enforcement agencies in their efforts to reduce violent crime, increase recruitment, and eliminate testing backlogs at crime laboratories and coroners’ offices in the state.