The village of Mount Sterling may not have a municipal swimming pool, school, or a dedicated grocery store, and it may still be struggling with the fallout from past bad governmental decisions, but it now has a council and administration dedicated to regaining its old pride, said Mayor Marci Darlington during her opening statement at the Jan. 27 village council meeting.

“The wheels of change move slowly, especially in a government setting,” Darlington said.
The key to seeing those wheels turn is to look to the future–a future of growth, one that will attract new business and create new housing, she said.

Darlington’s comments were partially aimed at residents spreading rumors and airing gripes on social media rather than addressing their concerns by contacting the mayor, a council member, or member of the administration directly, or by attending and speaking at a council meeting.

To that goal of increasing communication between residents and village officials, Darlington presented the hours that she will be present and open to the public at town hall. Starting Feb. 10, she will be available every second and fourth Monday of the month for the entirety of the work day, and every Wednesday from 1 to 6 p.m.

Melanie Fritz took the oath of office as council’s newest member. Fritz was appointed to the seat Darlington vacated when she was elected as mayor in the November general election. The term expires at the end of 2021.

Fritz, 37, has been a resident of Mount Sterling for more than two years and lives with her husband of 14 years and their two children, ages 9 and 11. Originally from Galloway, Fritz is a 2001 graduate of Grove City High School and has experience as a realtor and in pre-admission testing for Mount Carmel Hospital Grove City.

“I just see so much potential for change and growth,” she said. “I look forward to serving the community.”

Council passed several pieces of legislation, the first of which was an ordinance accepting the Madison County Auditor’s estimated entitlements for 2020 from the local government fund, tax rates and revenues.

Council authorized the village fiscal officer to transfer approximately $200,000 from the general fund to the water and street fund.

A third resolution allowed for the fiscal officer to remove unused fund categories from the Mount Sterling account in the Ohio Uniform Accounting Network system, essentially removing 14 pages of unused, left-over line items that had not been addressed previously as recommended by the state auditors. 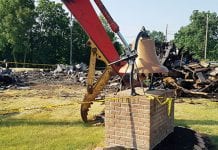 Not the end of the story for fire-ravaged church