Home Westside Messenger Message for a loved one 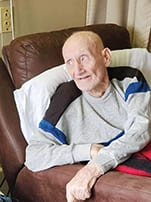 Prairie Township resident Gerald Seymour, 87, has been living at the Monterey Rehabilitation Center in Grove City since August 2019. Since the coronavirus outbreak, his family has not been able to visit him.

“It’s hard for us not to go see him,” said Tom Seymour, Gerald’s son.

So, the family decided to make the best of a challenging situation. They made large cards and stood outside the care center’s window with a message of love for Gerald.

Tom said the family had been sending Gerald care packages with some of his favorite foods like peanut butter and milkshakes, but they wanted to do more.

“We wanted to show him the family was all still together,” said Tom. “He (Gerald) was quite surprised and very happy. It lifted our spirits as much as his.”

According to Tom, it was about two years ago that his father was taken to the hospital with flu-like symptoms. He was treated and released. Just a few days later, Gerald was back in the hospital, where he was diagnosed with Guillain Barre syndrome, a neurological disorder in which the body’s immune system attacks the nervous system.

“He was completely incapacitated,” said Tom.

After his stay in the hospital, Gerald and his wife, Emma, moved to StoryPoint in Grove City. However, Tom said, Gerald needed more care, so he was eventually moved to the Monterey Rehabilitation Center, where he was been receiving “fantastic care.”

When Tom first started hearing reports about the COVID-19 virus, he said he was concerned about his father.

Tom was happy to hear the care center decided to institute a ‘no visitor’ policy during the COVID-19 outbreak, though he knew it would be tough on his father and his family.

For those who have a loved one in a care center or facility where visitation has been eliminated or decreased, Tom said it is important to remember the little things, like a simple letter or a quick phone call.

“It’s amazing how the little things can boost how they feel,” said Tom. “They know they haven’t been forgotten.”