Ohio Attorney General Dave Yost, members of the Ohio Peace Officer Training Commission and law enforcement officers from across the state gathered May 2 for the annual Ohio Peace Officers’ Memorial Ceremony to honor the 799 Ohio peace officers who have died in the line of duty since 1823.

“Public safety doesn’t happen by accident. It depends on the vigilance, actions and courage of real people who wear a badge,” Yost said. “We honor those who made this choice and paid the ultimate price for it.”

The ceremony took place at the Ohio Peace Officer Training Academy in London.

Among those honored are four officers who died in 2018:

On Feb. 10, 2018, Officer Eric J. Joering, 39, and Officer Anthony P. Morelli were dispatched to a home on a domestic violence call. After they were let in, a man opened fire. Both officers were hit and fired at the shooter, wounding him. Joering died at the scene.

Joering, who served as a K9 officer with Sam, a Belgian Malinois, had served Westerville since 2001 as a training officer, firearm trainer and street cop. Joering is survived by his wife and three young daughters. Sam retired from the Westerville Police Division and resides with the family.

On Feb. 10, 2018, Officer Anthony “Tony” Pasquale Morelli, 54, and Officer Eric J. Joering were dispatched to a home on a domestic violence call. After they were let in, a man opened fire. Both officers were hit and fired at the shooter, wounding him. Morelli died at The Ohio State University’s Wexner Medical Center.

Morelli began his career with the Westerville Division of Police in 1988 and was proud to protect Westerville, where he also lived. In his 30 years with the police division, he was voted officer of the year in 2003 and 2012, was honored with a Medal of Valor and received many other awards. Morelli is survived by his wife, daughter and son-in-law, son, his parents and many loving family members and friends in Westerville and Massillon.

On June 24, 2018, Officer Mathew J. Mazany, 41, arrived to assist a Mentor police officer who had pulled over a person wanted in another jurisdiction. As he approached the vehicle, he was struck by another vehicle.

Mazany served the Mentor Police Department for 14 years, was honored with the department’s Exceptional Service Award and received many accolades from Mentor residents for his professionalism and compassion. Mazany is survived by his wife and son, father, and many loving family members and friends.

On July 2, 2019, Officer Vu X. Nguyen, 50, collapsed in 90-degree heat during a canine-officer training exercise. He passed away on July 6 at Cleveland Clinic.

A 20-year veteran of the Cleveland Police Department, Nguyen was a popular officer, with commendations in his file including a Medal of Heroism and a special thanks from the FBI’s Joint Terrorism Task Force. He is survived by his wife and two children, and, as one of 14 siblings, a large extended family across the country.

Also honored were four officers who were nominated for historical induction to the memorial after their departments discovered that the officers had made the ultimate sacrifice for their communities in the past:

A moment of silence was held for Colerain Township Police Officer Dale Woods and Clermont County Sheriff’s Deputy William Brewer, who gave their lives in the line of duty earlier this year. In keeping with Ohio Peace Officers’ Memorial Ceremony tradition, Officer Woods and Deputy Brewer will receive full honors during the 2020 ceremony.

Law enforcement agencies from Butler, Cuyahoga, Fayette, Franklin, Hamilton, Lake, Lucas, Madison, Montgomery, Richland, Shelby and Summit counties were among those that participated in the ceremony. 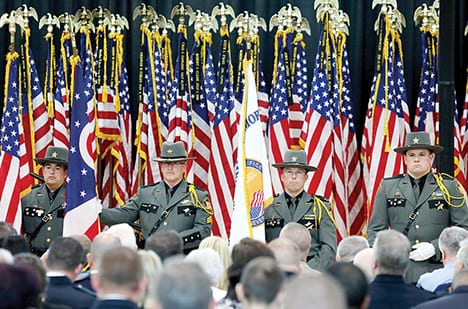