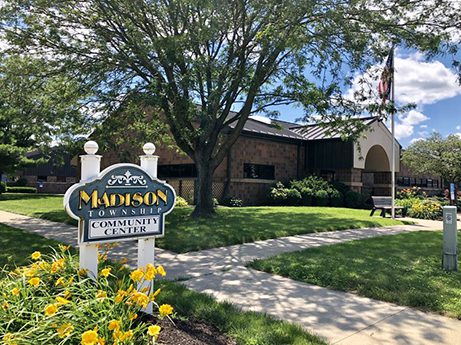 The cost for use of the Madison Township Community Center could go up and no more free rides for meeting space for non-profits and other township-based organizations could be on the horizon.

Madison Township Administrator Susan Brobst said the rates for the community center, located at 4575 Madison Lane in Groveport, have not changed since 2010.
For township residents the cost is $20 for the first four hours and then $10 for each additional hour. For non-residents, the cost is a flat $20 per hour fee. There is no charge for non-profits, school use, township businesses, employees, and funeral repasses.

Currently there is no cleaning fee.

Costs, such as changes in sanitation, are going up and Brobst said the township is not breaking even on the charges it assesses for community center use.

“I felt it was time to look at the fee schedule,” Brobst told the Madison Township trustees at their May 25 meeting.

She asked the trustees to discuss the fee schedule and wanted to give the public time to weigh in on the issue as well before a decision is made no later than the trustees’ July meeting.

“I am recommending no more free use and a flat cleaning fee of $20,” said Brobst. “The cost for residents would be $25 per hour for the first four hours and the same $10 for each additional hour. Non-residents would pay a flat $30 per hour. We need to do something.”

Based on 2019 figures before the pandemic impacted reservations, Brobst said a breakdown of average expenditures indicated each event cost the township approximately $116. Prices for residents and local businesses are lower than those for non-residents since non-residents do not pay property taxes.

Trustee John Pritchard pointed out the 12 year span since rates were last changed and said the township is presently just offsetting costs, but not breaking even.

“We need to have a substantial increase for non-residents,” said Pritchard. “I want to make sure there is a healthy difference between what our residents pay and what non-residents pay.”
Other township news
•Madison Township Assistant Fire Chief Chas Adams updated the board regarding a South Hamilton Road property that was deemed a nuisance before a second fire resulted in a call for service.

Adams said the house is extremely dangerous and was boarded up following the most recent fire. The Red Cross is assisting victims who were living in the house even after extensive damage from the first fire.

•Nuisance properties also resulted in almost 50 being tagged for attention last week. While property owners rectified many, seven resulted in action by the township for trash and 22 for grass. Superintendent Dave Watkins said a number of spring rainstorms contributed to the proliferation of nuisance calls.

“That seems to be a lot more than I remember,” said Pritchard.

Brobst said the township assesses a prorated $300 an hour fee if members of Watkins’ department need to mow a private residence due to inaction after notification. Residents are urged to contact the township office when a property becomes a nuisance due to trash and/or tall grass.