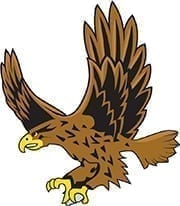 “As you attend various events around the district right now… and as you walk around the buildings, you see a lot of different logos and a lot of different fonts,” Eisler said at the Nov. 19 school board meeting. “The goal of the branding guide is really to bring uniformity to our district.”

The district’s official colors are now set as hunter green and athletic gold with accent colors of white, black and gray. The district has settled on two official logos. One depicts an eagle in mid-flight; the other is the head of an eagle inside a crest.

These colors and logos are not new to the district. In fact, the first graduating class at Madison-Plains developed the flying eagle logo. The logo depicting an eagle head inside a crest also has been used widely in the district, including on athletic merchandise.

District leaders got coaches involved in the decision-making process, asking them to vote on the logos.

“There was an emphasis put on trying to maintain the traditions of the district,” Eisler said about how the committee went about choosing the logos and colors.

Eisler will share the branding guidelines with teachers and staff, as well as local businesses and community members, so that district merchandise maintains a cohesive look moving forward.