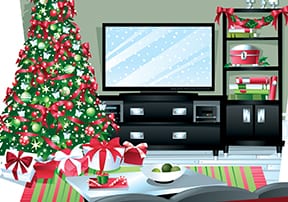 One of the most cherished is “A Charlie Brown Christmas.” It first aired in 1965 and was groundbreaking for its time. The Christian philosophy expressed in Linus’s speech about the first Christmas contrasts with the secular commercialism that has become part of the holiday observance.

I am joyfully thrust back decades in time whenever I see this show.

Three years before “Charlie Brown” aired, Mr. Magoo celebrated the holidays in 1962 with his vision-challenged version of “A Christmas Carol.” While Mr. Magoo does not draw the same devotion as Charlie, it is worth the hunt to watch his version of Ebenezer Scrooge.

Speaking of Scrooge—and I will argue this until Rudolph’s red nose no longer blazes a path through the night—there is only one glorious cinematic version of Charles Dickens’s masterpiece–the 1951 black-and-white film starring Alistair Sim.

It is as if Dickens wrote the timeless tale with Sim in mind, framed against the gray bleakness of London in the 1840s. Sim is the consummate Scrooge, smug in his pursuit of penny pinching and financial gain.

Sim blurs the line between actor and role as he becomes the quintessential curmudgeon, using his height to lurk over the less fortunate with a craggy face that runs the gamut from hardened miser to compassionate uncle.

Scrooge’s redemption at the hands of a trio of spirits showcases Sim’s dynamic acting chops in a role made for the actor and a holiday gift I unwrap year after year. If you only have time to watch one holiday classic, make it this version of “A Christmas Carol.”
Likewise, Irving Berlin’s homage to the holidays, “White Christmas,” is another gift I give myself.

The ending alone–where all the stage trappings are pulled away to showcase the snow falling outside as the four lead actors waltz around in the most amazing holiday costumes ever–is another cinematic Christmas card.

“White Christmas” whirls around the screen in glorious color, song and dance under the stewardship of Bing Crosby, Danny Kaye, Rosemary Clooney and Vera Ellen.

Yes, it is a classic boy-meets-girl/boy-loses-girl/everyone-is-happy-in-the-end story, but it is so much more. It is also a tale of doing something nice for someone who gave so much. Will it or won’t it snow? And its songs have stood the test of time.
What more could you ask for?

Unless it happens to be Rankin and Bass’s stop-motion 1964 animation classic, “Rudolph the Red-Nosed Reindeer,” a boy-meets-girl/boy-loses-girl/boy-finds-friends-and-a-snow-monster-and-gets-girl story. Or, if you rather, a Santa-makes-a-big-mistake story. Rudolph saves Santa’s reputation, the Island of Misfit Toys, and Christmas.

My list of holiday cinematic happiness is not complete without mentioning my modern favorites:“A Christmas Story,” “Emmet Otter’s Jug Band Christmas,” “Christmas Vacation,” “Elf,” “Jingle All the Way” and “The Polar Express” (the ending makes me cry every single time).

So, drag along a millennial or two, grab a cup of hot cocoa (topped with marshmallows, of course) and join me in the pursuit of the classics–holiday style.