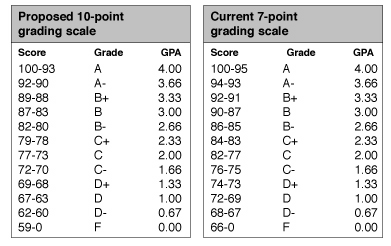 At London City Schools, a proposal is on the table to switch from a seven-point grading scale to a 10-point scale. That means, starting this fall, a score of 90 to 100 would earn an A versus a score of 93 to 100, and so on.

A committee of staff, students and parents met several times over the past year to study the idea and then draft the proposal, which they presented to the school board March 11. Now, the school district wants to hear what the public at large thinks. A public forum is slated for 6 p.m. March 20 in the high school auditorium.

The switch to a 10-point scale would apply to grades three through 12 (grades K-2 do not receive letter grades). Plusses and minuses (examples: A+, B-) would apply only to high school level courses.

A primary reason for proposing the change is to put London students on an even playing field with students from other schools, said Betsy Dennis, high school guidance counselor.

With the exception of Tolles Career & Technical Center, London is the only Madison County school using a seven-point scale. All of the others, plus area districts including Dublin, Hilliard and Olentangy, use a 10-point scale.

This difference makes an impact, she said, when it comes to competition for college admittance and scholarships.

“London City Schools sends a school profile with college applications to explain our grading scale, but we wonder, ‘Is that profile read by college admissions staff when they’re going through stacks of applications?’” Dennis said.

Additionally, grade point average (GPA) and ACT scores are determining factors for many scholarships. Sometimes scholarship committees look only at the numbers without taking into account different grading scales, Dennis added, which puts London students at a disadvantage.

Besides the advantages a 10-point scale would provide, the committee looked at concerns the switch might raise.

Chad Eisler, high school principal, said the change should have little impact on class rankings. Honors and Advanced Placement classes would still be weighted. Everyone would make the change at once, so the same rules would apply to everyone. The plusses and minuses would provide stratification within the 10-point frame-work.

As for the effect on GPAs, Eisler said, “I think there will be a slight upturn,” but nothing dramatic because the difference is just three points at the top of the scale and six points at the bottom.

The committee also addressed the concern that a 10-point scale could dilute grades. Gayle Reidenbach, the district’s curriculum director, said the grading system is still based on mastery of content. Also, separate from the grading scale proposal, the district is preparing for implementation of Common Core with the 2014-15 school year, which requires tougher standards across the board.