An example of Dorenda Watson’s artwork on display at Ursus Art Space until Aug. 31. The piece incorporates oil painting and life-like painting of objects such as a cracker and masking tape. 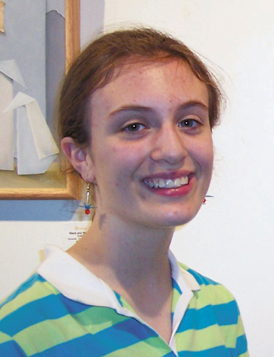 At first glance, the blue-and-green shiny object in Emily Grazier’s hand appears to be just a simple origami project, its geometric shapes forming a box.

But, after she delicately peels away each tab, the box unveils a seascape, complete with sailboats and whales she has intricately created with paper folds.

Grazier, a 13-year-old home-schooled student, will display her works in conjunction with works by her former Columbus College of Art and Design teacher, Dorenda Watson, at Ursus Arts Space in Upper Arlington until Aug. 31.

A recpetion recognizing the displays will take place 1 to 4 p.m. Saturday, July 26, at the studio, and will include live animals, courtesy of the Ohio Wildlife Center.

The bond between the teacher and former student began in second grade, when Grazier attended a second-grade art class at CCAD, taught by Watson. The two, who live near to each other in the Westgate area, have kept in touch over the years.

Watson has watched Grazier grow into a teen who has a knack for folding paper into ornate objects such as cranes, irises and scenescapes.

One of the pieces of work at Ursus will involve a garden scenescape with snails, Grazier said.

“I don’t think I saw that,” Watson said to Grazier, with amazement in her voice. “I have to see that.”

Grazier can’t pinpoint the exact age she developed her interest in origami.

Watson is adament that she did not teach Grazier origami. And Grazier’s mother, Lisa, claims she began folding origami at the age of 3. She does remember learning about origami, which is Japenese for “fold paper,” while attending Sunday school. Her teacher, who was Japanese, would spend time folding paper for the class.

“I remember experiementing,” Grazier said. “I think the first piece I tried to make was a table. I’ve always loved miniature things.”

Watson and Grazier came together for the upcoming show after Watson began experimenting with other painting techniques.

“I was working on paintings and I was interested in doing some origami in them,” Watson said. “Emily brought in a couple of her pieces, which were absolutely amazing. I can’t fold origami very well. I even had to go to Youtube for reference for my paintings.”

Knowing Grazier’s knack for detail in origami, Watson had her former student help with her newest works of art.

“She was laughing,” Watson said. “We cleaned them (origami pictures) up in the paintings. After I saw Emily, my art changed a little. I wanted to try something new.”

Watson approached Diane Maute, owner of Ursus Arts Space, about Grazier’s interest in becoming involved with an art show. Watson has been a featured artist at Ursus over the past two years and thought Grazier’s pieces would fit perfectly. At first, Maute was hesitant at just the description of Grazier’s work, but when Watson showed her some of the pieces, Maute was impressed.

“She said I tricked her,” Watson said, laughing.

Grazier will offer 22 pairs of earrings that feature tiny origami decoupaged origami objects and crystals, each of which come in individual origami boxes. Grazier’s pieces will also include a total of three cubes with miniature scenes, several origami geometric cubes, and origami irises with copper stems.

A typical project takes about two hours to complete, and the earrings, Grazier added, took about an evening to make.

Though Grazier has only officially sold one pair of earrings to a family member, she hopes to see interest from the public in her works.

The paintings are so real that many get close to the paintings and have tried to “peel” off the tape, Watson said. She added the tape in the paintings because as a teacher, she said, she’s always using tape.

“Emily can vouch for that. I have a tape fascination,” Watson said. “Tape and oil painting? There you go. I was primarily a ‘deer-in-the-woods’ artist, and then I started incorporating objects in art and it came down to paper, tape and animals. It’s different and not what I’m used to, but it has just flowed together.”

Watson’s five pieces will be up for sale and include a flamingo on one leg, reflected by an origami replica of the bird. Another piece features a parrot in a painting of a ripped photograph, staring at a cracker.

Since the age of 6, Watson has painted oil paintings and eventually, began teaching at CCAD. She teaches youth and considers her job rewarding, especially when seeing a student such as Grazier, succeed.

“The children keep me young and outdo me,” Watson said. “I learn a lot from them. They keep my art fresh, so I’m not stuck in a rut. My second-graders will even critique me for free.”

Learning art young is important, Watson believes, in order to develop a fine appreciation, as Grazier has.

“Art is leaving a lot of schools,” Watson said. “So, I do classes in different venues. I teach the children that everything on the planet that wasn’t created in nature, was created by an artist. Children have a bad perception of art sometimes. They think they’ll be poor.”

Watson always invites her students to her art shows to prove a point, she said.

“I want the kids to see I’m a working artist,” she said. “It’s exciting for them to know what I do.”

“Dorenda gets a lot of people,” she said. “She has quite the following.”

Though Maunte’s intentions early on with the studio were to feature artists in a minimalist setting, she has now changed her focus to feature handmade items from local artists such as Watson and Grazier.

“And I’m here to support the local school and college kids’ art,” she added.

“Caught in the Act” on the Hilltop

614 Beautiful grant will shine a new light on the Hilltop