On May 9, Light Ohio Blue surprised Choctaw Lake resident and U.S. Marshal Peter C. Tobin with the organization’s first Lifetime Achievement Award: Icon of Law Enforcement. The award is named after Tobin and will be presented annually to an Ohio officer who has dedicated his or her life to law enforcement and made a positive impact on their colleagues and community.

Light Ohio Blue is a statewide campaign to show visible support for law enforcement personnel and to honor those who have died in the line of duty, as well as their surviving family members and their co-workers. The campaign’s efforts coincide with Peace Officers Memorial Day and Police Week, first proclaimed in 1962 by Pres. John F. Kennedy and observed every May since.

Each year, Light Ohio Blue kicks off its activities with a caravan of law enforcement officers and vehicles. Traditionally, the caravan starts in Columbus. This year, it started in London at the Ohio Peace Officers Memorial on the Ohio Peace Officers Training Academy grounds. It then made its way to the Franklin County Training Academy, Motts Military Museum in Groveport, and the National Veterans Memorial & Museum in Columbus.

“Marshal Tobin has been an institution in central Ohio law enforcement for decades,” Swank said at the surprise presentation. “He has never shied away from making difficult decisions or from leading from the front. And he has always kept the best interests of the citizens and his officers at the forefront.

“His name, when spoken by officers, no matter how many years they have put into the law enforcement vocation, brings out reverence.”

Tobin started his law enforcement career in 1971 with the Columbus Division of Police. He rose through the ranks to lieutenant, retiring in 1994. He was an original member of the division’s SWAT team and later served as its commander.

Following retirement, he served as Powell’s police chief for a short time before accepting a position as deputy director of the narcotics division at the Ohio Bureau of Criminal Investigation (BCI). He remained in that position until 2004. 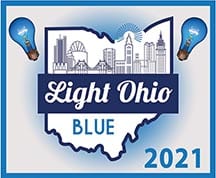 Light Ohio Blue was founded in 2016 as Light Columbus Blue following the death of Steve Smith, a member of the Columbus Division of Police’s SWAT team. Later, as the organization expanded its involvement, the name changed to Light Central Ohio Blue. Three years ago, the initiative went statewide with the support of the Ohio Association of Chiefs of Police, Buckeye State Sheriffs Association, Ohio State Highway Patrol, and the state lodge of the Fraternal Order of Police.

Light Ohio Blue urges everyone to literally light Ohio blue for one week each May. Citizens place blue lightbulbs on their home’s exteriors, businesses light up their storefronts and rooftops, and churches shine blue from their steeples. The show of support takes many forms, even as simple as a blue ribbon on a mailbox.

“No matter how big or small, it’s to bring awareness,” Swank said. “It’s always the right time to show support and even more so last year with the pandemic. It gives (officers) a boost of positivity, letting them know that they are appreciated and what they do does not go unnoticed.”

Each year, Light Ohio Blue presents a handful of awards. This year, Jessica Davis of Bridge The Gap was named Citizen of the Year. Det. Adam Beach of the Licking County Sheriff’s Office was named Officer of the Year. The Blue Crier of the Year, presented to a public information officer, went  to Lt. Tiffiany Meeks of the Ohio State Highway Patrol. The lifetime achievement award is new to the recognitions. Additionally, Light Ohio Blue named Ralph Portier, who recently retired as Groveport’s police chief, as grand marshal of this year’s Light Ohio Blue caravan.