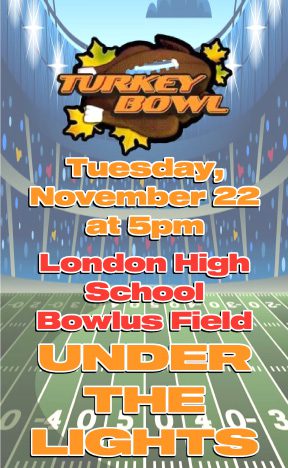 The London High School football team and St. Patrick School are joining forces to host a Community Turkey Bowl & Food Drive on Nov. 22. The event will take place at 5 p.m. under the lights on London High School’s Bowlus Field.

The “bowl” part of the event is open to London City Schools and St. Patrick students in grades K-8. The field will be sectioned off into smaller fields. Boys and girls who choose to participate will be divided into teams by age group, then play two-hand touch, backyard-style football. London football players will serve as the quarterbacks and coaches. All of the games will take place simultaneously.

The “food drive” part of the event asks that anyone who attends donate a non-perishable food items. Donations will be divided between HELP House and the Madison County Food Pantry. Items needed include: jarred gravy, boxed stuffing, boxed cornbread, and cans of green beans, corn, peas, mixed vegetables, peaches, pears and pineapple.

The Turkey Bowl came about following a conversation among staff members at St. Patrick School. They were discussing things the school used to before the pandemic, one of which was a combination football game and food drive. They used to hold it on the athletic fields behind the school.

“Marcus Stone (a teacher at St. Patrick and a football coach at London) was there, and he started throwing out a bunch of ideas,” said Rick Logue, St. Patrick principal. “We talked about bringing it back but involving more people. Marcus is the one who had the idea to put the games on London’s field. It evolved as a whole team effort.”

“We’ve been talking about finding ways to give back to the community,” Cutler said. “The holidays are not necessarily great for everybody. We wanted to do something fun for everyone and bring the totality of the community together.”

Cutler and Stone invite students to participate in the Turkey Bowl as spectators or players. Students can simply show up the night of the event or pre-register by contacting Cutler at kyle.cutler@london.k12.oh.us.

The Turkey Bowl is all about making a positive impact. Older students get to know the feeling of helping others. Younger students get a chance to have some fun. The adults in charge get to take part in teachable moments. And local families in need get food for their Thanksgiving dinners.