If there is one thing Daryl Pruitt has learned about Dr. Jacob “Jake” Froning over the course of their friendship, it is that little escapes his attention.

“He is a very hard man to keep a secret from,” Pruitt explained.

Yet this knowledge did not stop the athletic director at St. Patrick Catholic School from undertaking a massive effort to keep the retiring principal in the dark on the particulars of a project near and dear to his heart.

“This process has definitely been a challenge,” Pruitt said with a laugh.

The idea for this clandestine operation began to take form two years ago when rumors circulated that Froning was contemplating retirement.

In case the rumors proved to be true, Pruitt wanted a plan in place to honor the educator, leader and person that has meant so much to the greater London community since he moved to the area in the early 1980s.

Knowing Froning’s likes and dislikes, Pruitt immediately thought a dirt-filled diamond would be the ideal way to celebrate.

Even before the duo struck up a friendship years ago, Pruitt had heard of Froning’s passion for baseball, specifically the look of the infield on the school grounds.

“My brother-in law, Dave (Wiseman), was the (athletic director) years before I was, and he would always tell me about how particular Jake was about the field and how he didn’t trust anyone else (but himself) to drag it.”

By weather-related happenstance one year, Wiseman had the opportunity to drag the infield and recalls the anxiety he felt while doing so.

“Even though Jake was away at a teachers’ meeting and even though he gave me specific directions on how to drag the field using various grid patterns, I was so nervous doing it,” said Wiseman, London’s former police chief. “I didn’t want to disappoint him in case he saw it.”

It is no secret in the community that the baseball field has been lovingly referred to as Froning’s baby, said Pruitt, and it just made sense that it be named in his honor for his retirement.

As fortune would have it, Froning did not retire that year, nor did he retire the following year. This year, however, Froning officially decided it was time to retire and Pruitt hit the ground running with a revised retirement celebration plan.

Several months ago, Pruitt began to inquire about the cost of improvements to the ball field. It needed a new dugout, fencing, and an overall “refresher.”

“It was still beautiful but it needed a makeover,” he said.

Pruitt thought the project would be the perfect time to plan Froning’s dedication ceremony but knew how difficult it would be to keep the plans from him.

“Unfortunately, I had to tell him about the project because I needed his approval for the dugout, but I had to be careful about the party planning aspect.”

Using Froning’s lack of social media presence to his advantage, Pruitt sent a social media and email blast throughout the school and community to raise funds for the improvements and invite folks to the May dedication ceremony.

He even had to turn down Froning’s request to make a donation to the improvement project, which later turned into a plea.

“That’s just the kind of guy he is,” said Pruitt. “Always willing to help a cause.”

With the funds raised–the community raised double the amount requested–and the equipment in place, Pruitt asked Froning to come to a “dedication ceremony” before the boys’ baseball game on May 6. 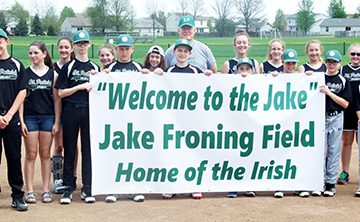 Though nearly 50 people were there, including his relatives, Froning did not suspect the gathering was in his honor and expressed shock that the community was able to keep this a secret from him.

“I am completely surprised and blown away,” he said during the ceremony.

Froning later added that it was a blessing to have been a part of it.

“The ceremony was a real honor for me and I am very appreciative of it all.”

Though Froning knows his commitment to the ball field has always been the talk of the town, he said he began its maintenance when he came to the school 18 years ago because no one else was doing it.

“I grew up on a farm, and taking care of the field and its surroundings brought me back to my farming days,” said the New Bremen native.

Froning said it was never his mission to be the head groundskeeper, if you will, but he always found the task to be thoroughly enjoyable.

“I have to keep it in good shape for the kids,” he said.

Baseball Coach Stu Fullmer said they are certainly appreciative of his efforts.

“These kids will be talking about how great the field they played on was for the rest of their lives,” Fullmer said.

He said it will add more meaning for them knowing it was their principal who was out there making the field as safe and beautiful and memorable as possible.

This was not the first field Froning tended. During the ceremony, his younger brother, Rick, told the crowd that Froning and their father built a ball field on their property so they could play when they wanted. He said it was only fitting that his brother has a ball field named in his honor.

Though his last day as principal at St. Patrick is rapidly approaching, Froning said he would like to continue maintaining the field and beautifying the grounds whenever possible during his retirement.

Pruitt said he doubts much could keep his friend away.

“He’s been out there 24 hours a day and seven days a week it seems, and now he’ll have even more time to be there,” he said jokingly.

Froning said the legend about his time on the field has been greatly exaggerated but appreciates how much attention is paid to the look of the field.