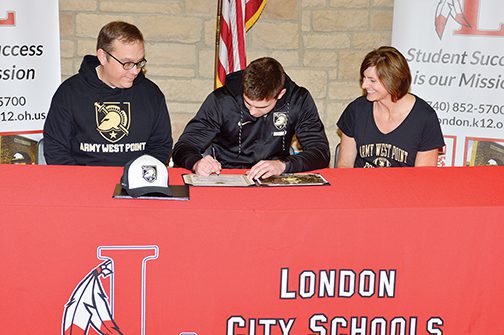 Miller Kronk (center), a senior at London High School, signs his national letter of intent to play football for the Army Black Knights football team, which represents the United States Military Academy in college football. Army is a Division I Football Bowl Subdivision member of the NCAA. With Miller on signing day, Dec. 20, were his parents, Rod and Ginger Kronk. Miller holds four letters in football, two in soccer and one in track. He holds the school record for longest field goal made at 51 yards. He was named first-team all-Mid State League in 2016 and 2017, first-team all-Central District in 2016 and 2017, special mention all-state in 2016, first-team all-state in 2017, and academic all-league in 2015, 2016 and 2017.