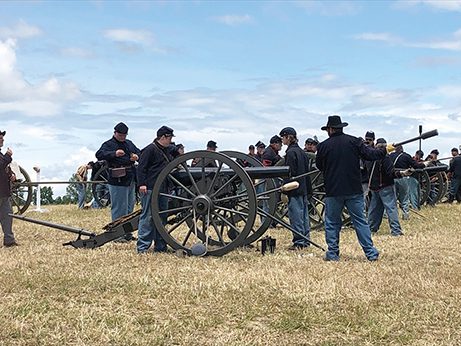 Battle scars on cannons that served in the Civil War can be found in national parks and museums, but ones cast after the end of the war, like the three-inch ordnance rifle cared for by Art Short, are experiencing a living legacy in modern times.

The big cannon now lobs volleys across fields where Civil War re-enactors don uniforms similar to those worn by their 1860s counterparts in recreating skirmishes that once took actual lives.

“This cannon has been maintained and handed down through families since it was built,” said Short. “It has been in many movies such as ‘Glory,’ ‘Gettysburg,’ and ‘Gods & Generals.’ It was the utmost in technology when it first came into being in 1861 and was the most used and feared weapon in the Civil War. As in all military, the artillery is the backbone and power of any army. We have involved and evolved the artillery into the 40th Ohio through much time and diligence in maintaining and transporting the cannon and keeping it in full working order.”
The ordnance is set on an oak carriage from an original 1861 design and must be maintained and repaired due to its use at events throughout the year. It is housed and transported on a custom-built trailer.

“This is a very dangerous cannon and we are fully trained professional Civil War preservationists,” Short said. “This is a true working, firing weapon with one pound of gunpowder per shot. It is used and fired today in the same manner as it was originally designed. We follow all the original rules of ordnance when in events and demonstrations. We uniform up, drill, and practice and perfect the form of the steps in the loading and discharge of the cannon as the original 1861 U.S. Artillery manual states.”

Short emphasized that, as Civil War preservationists, the 40th Ohio re-enactors do not glorify guns or war.

“We want to teach people, children, students that they need to learn from history—good or bad—or we will be doomed to repeat it. That is why we do everything we do,” said Short.
Short was first bitten by the Civil War bug when he saw the movie “Glory,” starring Morgan Freeman, Matthew Broderick and Denzel Washington. He said he found the story moving and called it a “must watch” for anyone interested in Civil War preservation.

One thing led to another and in 2010, the Lockbourne resident and his family became involved with historical re-enactment after meeting Capt. Andrew Mott of the 40th Ohio Voluntary Infantry.

Participants in historical re-enactments recreate specific moments of a historical period or a particular battle like Gettysburg by following a formalized plan and wearing period clothing.

Re-enactments can last for multiple days and participants eat and sleep like their 1860s counterparts in tents ringing the battlefield.

The tradition dates back to Roman times when battles were staged for the entertainment and education of an audience seated in an amphitheater. Today, re-enactments can draw large crowds as well.

“We decided to join and have grown in knowledge and friendship in Civil War preservation ever since,” said Short. “We participate in school teachings in the first half of the year and then larger re-enactment events and living history events throughout the year. Large events such as Gettysburg take a lot of planning and it still works much like the original Civil War army involvement. High ranking officers pass down orders and then they are followed throughout the event.”

According to Short, smaller living history and school presentations are done in cooperation with principals, history teachers, and owners of historical villages where living history events take place. He is hopeful his group is able to partner with Obetz and Mayor Angie Kirk in conducting an event later this year.