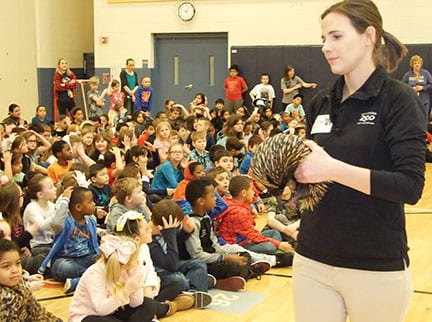 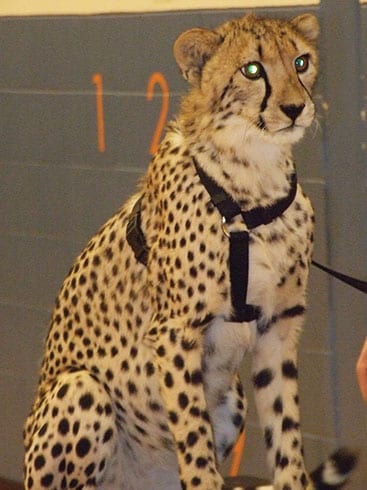 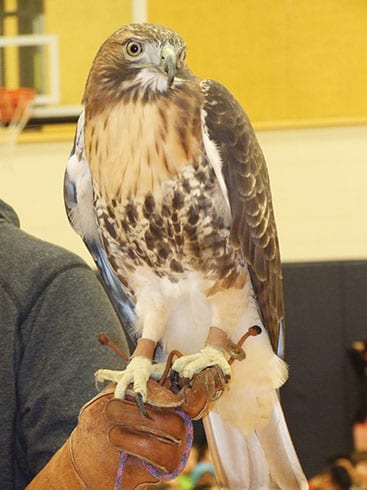 The long table covered with black cloth, sporting the logo of the Columbus Zoo and Aquarium immediately attracted the attention of the students at Prairie Lincoln Elementary as they streamed into the gymnasium. Some screamed in delight as they laid their eyes on the object situated by the far wall, while others dared to get as close as they could.

The adults tried to corral their excitement as they led the students to safe spots on the floor, but their giddiness could not be contained.

“It’s a zoo in here,” one teacher jokingly lamented.

Then the doors to the outside opened, and two animal programs specialists with the zoo walked in sans animals. The students were puzzled and let their questions be known.

“They’re coming out soon, I promise,” said Samantha Abrams as several students asked where the animals were.

Though it is not uncommon for schools to host a visit from the Columbus Zoo and Aquarium, the slate of animals that were to be introduced were and the students knew this.

“These are not animals we have on exhibit,” Abrams said, “so they are getting a rare look at and access to some of our ambassadors.”

After the crowd had settled down, program specialist Hardy Kern brought out a Red-tailed hawk named Uno who is blind in one eye, and then a rare Echidna named Edna who delighted the students with her unique features and her lack of fear of table edges. But then the program specialists went outside to get the final two animals and a hush fell over the room. Though quiet, the excitement was palpable and was further amplified as the doors re-opened. First and by Abrams side was Coby, a sweet faced Labrador retriever who soaked up the attention. Then came Kern and by his side was Debbie, a young cheetah intently focused on her best friend Coby.

With an effortless leap on the table and a gasp from the audience, Debbie settled down on to the cloth while peering out at the gaping mouthed audience. As she observed, Abrams spoke of the threatened status of the cheetah and the efforts that have been underway to save the species.

One such way, she said, is through conservation education which author Linda Stanek spoke of to the students after the animal presentation.

“I’m completely fine with being upstaged by the cheetah and the other animals,” said the Columbus-based author.

Though Stanek has been writing and publishing children’s novels for years, she started writing books for and with the Columbus Zoo and Aquarium when Beco the elephant was set to celebrate his first birthday.

“It was just a bit of luck,” she said of Beco’s Big Year: A Baby Elephant Turns One. “I knew the editor and she asked me to write it and I couldn’t say no.”

Harboring a childhood passion for animals – her first dream was to work at a zoo – she turned her skills to writing about conservation and biodiversity for children. In five years, she wrote the acclaimed “Once Upon An Elephant,” “Night Creepers” and “Cheetah Dreams,” which came out last fall. She said one of the best things about writing about animals and conservation is the feeling that she is making an impact on the world through her words.

“Achievements can be made through writing,” she said. “You just have to read, find a subject or subjects you are passionate about and try your best.”

Kindergarten teacher Emily Moler, who helped schedule Stanek’s collaborative program with the zoo, said she believes this visit will continue to make a lasting impact on the school.

“There are so many students who have not been to the zoo or may not be able to go due to financial means, but this event brought a wonderful author, the zoo and a cheetah to us,” she said. “It’s a once-in-a-lifetime opportunity for our kids, even for me and some of our staff, and I am so grateful our school got to be a part of this.”

“Caught in the Act” on the Hilltop

614 Beautiful grant will shine a new light on the Hilltop