A plan to develop the Brown’s Farm property along Orders Road cleared one more hurdle in the city of Grove City.

At the Nov. 19 meeting, Grove City Council approved a rezoning request with a 3-2 vote. The rezoning allows for residential units on 68 acres located south of Orders Road and east and west of Haughn Road. The rezoning was a request from the developer, Jonathan Wilcox of Wilcox Communities. He plans to build 220 apartments and 110 condominiums for senior citizens on the farm land.

The rezoning request was the second step in getting the senior housing plan finalized. City council approved a preliminary development plan earlier this year. The final step will be the development plan.

“Let’s roll up our sleeves and hash out the details in the final development plan,” said Wilcox.

Those details have some council members and community members concerned. Council members Christine Houk and Roby Schottke voted against the rezoning classification. Houk said access to the property has not been fully addressed nor has infrastructure concerns.

“There are still unanswered questions,” said Houk. “I don’t think we’re ready to make this decision.”

According to Wilcox, the property would be broken into two subareas. One area would include the apartments, the other, the condominiums. One of those subareas has access to sewer and water lines. The other does not. Wilcox said they would need to take a sewer line under Interstate 71 from the Mount Carmel Hospital and extend it to the property.
Wilcox said he wanted to work with the city on a TIF (tax increment financing) agreement to make those infrastructure repairs.

It is not just the sewer line that has some council members and community members concerned. It is also the increased traffic on a narrow roadway.

Orders Road resident Richard Wirtz said this development plan would increase the density in the area and he is worried about the safety along Orders Road.

Resident David Hellard said he has seen three accidents in front of his home where people have been killed. He said this development plan offers no comprehensive traffic plan for Orders Road.

“It would be regrettable for safety pleas to be ignored to save the developer money,” said Hellard.

While some residents believe the infrastructure needs should be met before development takes place, city leaders say otherwise.

City Administrator Chuck Boso said the city of Grove City cannot address the infrastructure issues unless there is a project that generates revenue to fund those projects.

“There are no funding sources,” said Boso referring to repairs that need to be made on Orders and Haughn roads.

Grove City Mayor Richard “Ike” Stage said many projects in the city have come about through development.

“There is still a lot of work that needs done, but this is no different than Margie’s Cove,” said Stage. “Buckeye Parkway was fixed by a TIF through development.”

The mayor said the city must rely on cooperation from developers.

“We can only do so much,” said Stage.

Stage also pointed out that Old Haughn Road is a county road and parts of Orders Road are in Jackson Township.

Council approved new regulations regarding the storage of trash and recycling containers to account for the newer 65-gallon recycling cart.

According to Houk, there have been complaints from residents who say some leave the containers out along the curb for long periods of time. The legislation would reduce blowing waste and decrease access to trash by animals.

The legislation states that garbage, refuse and recycling shall be placed in containers and those containers must be placed curbside for collection. If there is no curb, the container should be placed at the edge of the roadway. After collection, containers shall be returned by 11:59 p.m. on the day of pick-up to a location at the side or rear of the residence where it is not visible from the street.

Houk said enforcement would be complaint driven and violators would be given a notice if they were not in compliance.

“We are not out policing,” said Houk.

Council approved an ordinance to set aside $398,000 from the general fund for the redesign of the Gantz Park Playground.

The playground is the most used in the city and the equipment is more than 25 years old. The updated playground will be designated as an all-inclusive play area.

The city received a grant of $300,000 from the state of Ohio and a matching grant from Gametime. City leaders hope to have the new playground equipment in place in July of 2019.

I Know I Can to expand services in SWCS 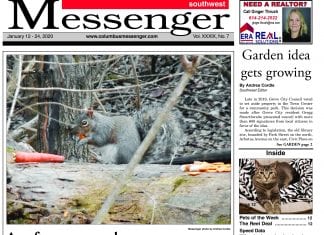