Confusion over responsibilities related to a new community garden dominated the recent Franklin Township board meeting.

Township resident and coordinator of the Broadlawn Community Garden, Tim Chaney said that when the garden was originally setup, he was told the township’s fire department would be supplying water to the garden.

“I was told we would have access to water. This is one of the reasons we didn’t get a rain catch system,” Chaney said. “If I had been told differently, we could have raised money to get this system. Now I have crops dying because of the heat and not having water.”

Chaney said in order to save the vegetables, he has been bringing jugs of water to the plants, but this is not a long-term solution. He requested that the fire department come to the garden and fill up containers on a regular basis.

The garden, which is located at 125 Florence Ave., is managed by Friends of the Hilltop and any township resident can participate in the garden.

The Franklin Township trustees did not recall promising unlimited water. According to trustee John Fleshman, the fire department never agreed to help with this and instead said they would help when they could with a backup piece of equipment. However, that equipment has been out of commission and is in the shop undergoing repairs.

“With only one piece of equipment in commission, we wouldn’t want to be over there filling up your water and something happens,” Fleshman said. “Also, this life saving equipment has to carry a certain amount of water. If we pulled up to the scene and didn’t have enough water because we gave you some water that would be horrible.”

Fleshman added that this is the Franklin Township Fire Department chief’s recommendation and he cannot go against the chief. However, the trustees did agree to compromise and allow Chaney to come to the fire station and fill up his water containers for this year’s growing season.

“We need to come up with some memorandum of understanding between your organization and the township related to the garden,” Fleshman said. “We don’t want to tell people what type of shovel to use, but we want to have an agreement in place related to water, storing equipment, maintenance and other factors that go into setting up a community garden.”

Chaney also asked the board to pay for a shed to protect the tools in the community garden, however the trustees said they could not afford this. Instead, they said they would provide them with information to apply for a grant through Home Depot. 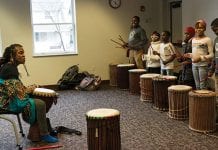