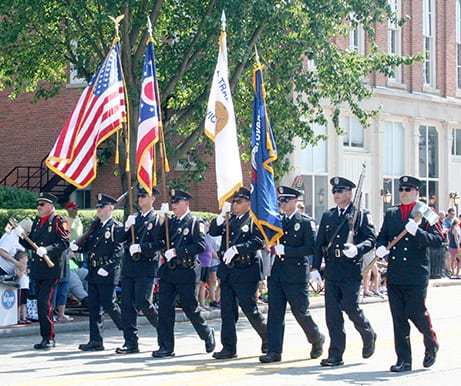 The city of Groveport will once again celebrate the Fourth of July this year after last year’s event was cancelled due to the ongoing coronavirus pandemic.

The city will hold its Independence Day celebration, which will feature a parade and fireworks, on July 3.

“It is important to hold the event this year to give the community a traditional Independence Day celebration,” said Groveport City Administrator B.J. King. “It has been a long 14 months and things are progressing towards normalcy. We are all wanting to get back to doing our normal activities and way of life. Other central Ohio communities also plan to have Independence Day celebrations so we are not the stand alone. I feel like what we plan can be done in a safe manner. Plus, come July, I anticipate the situation with COVID-19 will be significantly better.”

The fireworks will be launched at dusk on July 3 from Palm Pond in Heritage Park on Wirt Road.

In light of Gov. Mike DeWine’s May 12 announcement about the lifting of the coronavirus health orders as of June 2, city officials are re-evaluating on whether or not to hold the kids games and activities as part of the city’s Fourth of July celebration.

“It’s all fluid right now,” said King. “We will meet with the Fourth of July committee to discuss things further.”

King said, as of now, standard safety protocols are recommended, such as mask wearing and social distancing when possible.

Ohio Flags of Honor
Independence Day weekend in Groveport will also feature the Ohio Flags of Honor Traveling Memorial, which honors the men and women of Ohio who gave their lives in service to their country. Specifically, those fallen in the wars in Afghanistan, Iraq and the war on terrorism since Sept. 11, 2001.

Set up day for the flag display at Madison Christian Church’s soccer field will be July 2 from 7 a.m. to noon. Volunteers are welcome to join.

The flag display will be open to the public beginning at noon on July 2 and will remain open until the closing ceremony on July 5.

At 9 a.m. on July 3, the Ohio Flags of Honor truck procession will begin at Eastland Mall, travel through Groveport, and end at Madison Christian Church.

For information on the Ohio Flags of Honor, visit ohioflagsofhonorgroveport.info.

The return of the class of ’85