The Groveport Presbyterian Church has been a source of spiritual and community outreach in Groveport for 168 years, but now the church is closing.

The beautiful little red brick church, located at 275 College St., has been home to church services, tasty spaghetti dinners, the Safetytown program for kids, and much more. The historic church’s last services will be on July 11 with its regular morning service and a special “celebration of life” service at 2 p.m., which will include representatives from the Presbytery of Scioto Valley.

“Most of our members are retired folks and elders and we just don’t have the manpower to do the things we like to do for the community,” said Piper. “Recently we’ve had four members pass away. Every person you lose hurts.”

Piper said another factor affecting the church is that it is not fully handicap accessible, which makes it difficult for some members.

According to Piper, the church’s money resources are down, but the church is not in debt.

“There’s a lack of attendance and giving is down and that is a huge concern,”said church member Margaret Ann Cottrill, who has been a member of the church for 67 years. “We’re doing okay now, but going forward it is a real issue. We’re not growing, but it’s not for a lack of trying.”

Piper said there were mixed feelings in the congregation about closing.

“No one wanted to close,” said Piper. “It’s a wonderful group to worship with. It’s a hard decision and we prayed about it.”

There are three other nearby Presbyterian churches the members could attend in the future in Lithopolis, Amanda, and Circleville. 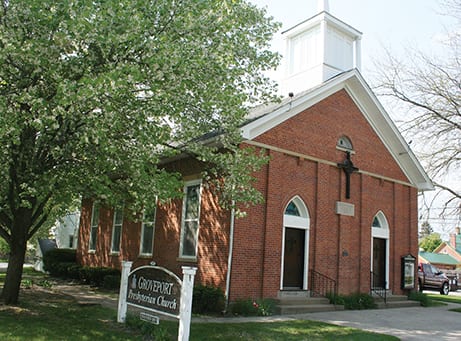 Early history of the church
The Groveport Presbyterian Church formed in early 1853 when 11 people met in the home of Samuel and Elizabeth Sharpe to organize the congregation. More members soon joined and the fine brick church was built on College Street and dedicated on Oct. 5, 1853. It is the oldest church structure in Groveport and the longest church building in continuous use in town. Over its 168 years, the church has been redecorated, art glass windows added, as well as other amenities. An addition to the church was constructed in 1949.

The first pastor was Samuel Wilson and the first wedding in the church was in 1867 when Maggie McIntyre and Miner Rarey wed.

“At our recent Easter service, I felt the presence of those who started this church here in 1853,” said Cottrill.

Serving the community
The church has held many events and worked to help the community in many ways throughout its long history.

Piper noted the spaghetti dinners, the women’s teas, and mission projects such as assisting the Groveport Food Pantry and participating in Adopt-A-Family.

“The women’s teas featured people of all denominations,” said Piper. “It was an opportunity to socialize over a cup of tea. There were food drives for the food pantry held at Kroger where the church could raise 1,000 canned and other food items. Some years the church adopted up to 12 children for Adopt-A-Family.”

There were also school supply drives, Halloween trunk-or-treat, and assisting Friends of the Homeless as well as the Safetytown program for kids.

Going forward
Piper said the Presbytery of Scioto Valley owns the church structure and will determine its fate.

“They will make the decision about the future of the church building,” said Piper. “Our congregation has no control over that. It is a nice facility.”

Both Piper and Cottrill said that the church is more than a building.

“It’s the people,” said Cottrill. “When one enters the sanctuary, whether it is Sunday or not, there is a spirit within these walls where one feels the presence of the Lord.”

Cottrill noted that, at the end of a Sunday service, a lit candle is walked to the doors of the church, symbolizing that the spirit and the light goes with the members as they go out into the world.

“It doesn’t end here,” said Piper. “Our mission is not over. We are still sharing the word of God.”

Added Cottrill, “This may be the closing of a church, but it is not ending the spread of the Gospel. Our Lord will lead us to new things and guide us wherever we are. He is with us every step of the way no matter what.”