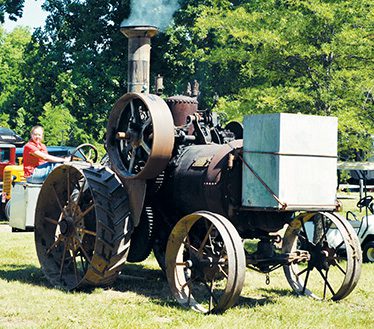 All sorts of old-fashioned engines will be percolating July 12-15 as the Miami Valley Steam Threshers Association puts on its 69th Annual Show and Reunion at Pastime Park in Plain City.

Every year, the association chooses different makes to spotlight. This year’s features are Ford engines and anything unusual or rare.

When asked for examples of the latter, Gary Gallimore, association president, said many might not know that the department store, Montgomery Ward, once made farm equipment. He also mentioned Plymouth tractors which were named, at least for a while, after the town in Ohio where they were made.

“The Plymouth car company sued over the name and won. So, (the tractor company) started calling their equipment Silver Kings,” Gallimore said.

“There aren’t many years go by I don’t learn something new at the show, and I’ve been involved for over 26 years,” said Gallimore, adding that the opportunity to learn is huge for younger generations.

“Our motto is, ‘Preserving the past for the education of the future.’ That’s what it’s all about.” 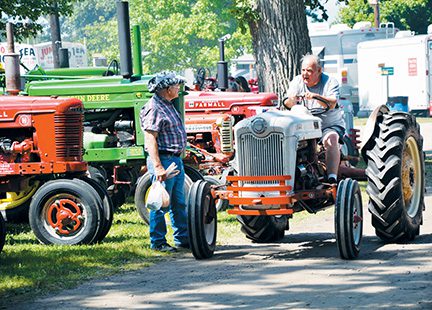 The show’s also about having fun. New to the schedule is a garden tractor pull and back after a few years off are “tractor games.” Some of the games, like the barrel roll, involve tractors. Others, like the egg toss and the skillet toss don’t. Interesting note about the skillet toss: Years ago, to remedy the problem of skillets that broke during competition, the association commissioned Friesen Fab & Equipment in Plain City to fabricate an unbreakable skillet. The 10-pound stalwart returns to the spotlight this year.

“There are no big prizes for these contests. It’s just a way to get people involved and interacting,” Gallimore said.

Along those lines, the show will hold its second annual tractor ride. On Friday, interested exhibitors will go for a 22-mile drive, stopping for lunch along the way.

“We started the ride last year and had a lot of enthusiasm. Twenty-two participated last year. If I was a betting man, I bet twice that many will do it this year,” Gallimore said.

“We’ll treat you so many ways, you’re bound to like one of them,” Gallimore said.

Admission is $5 at the gate. Children 12 and younger are admitted free with an adult. On Thursday, visitors 55 and older are admitted for $2 until 2 p.m. An annual Steam Threshers membership is $20 and includes two show passes.

10 a.m.–Opening and flag-raising with member memoriam