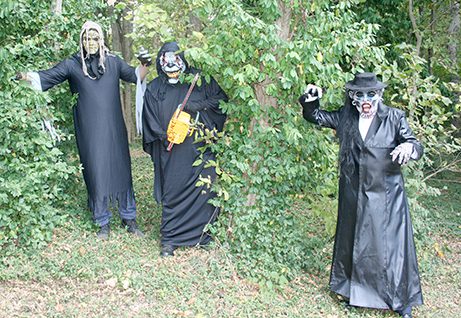 Groveport’s Blacklick Haunted Park returns for its fourth year with a host of ghouls, monsters, and other assorted things that go bump in the night to give visitors a Halloween fright.

The scary event, sponsored by the city of Groveport and Groveport residents, will be held Oct 22 and 23 from 7:30-11 p.m. and Oct. 24 from 1-3 p.m. in Blacklick Park, 799 Blacklick St. (The park is located at the eastern end of Blacklick Street in Groveport.) Cost is $5 per person on Oct. 22 and 23 with proceeds going to Groveport Madison Human Needs and the Groveport Food Pantry. Organizers said the event on Oct. 22 and 23 is very scary and parental discretion is advised. However, the Sunday session will be a bit different.

“The Sunday, Oct. 24 session is free for little kids age 10 and under and this session will be a little less scary for the little ones,” Bruce Smith, one of the Blacklick Haunted Park organizers.

The idea for Blacklick Haunted Park arose in 2017 from three friends who share a love of Halloween – Bruce Smith, Scott Clinger, and Larry Geis. They came up with the idea for the haunted park as a way to raise money for Groveport Madison Human Needs and the Groveport Food Pantry while also providing an outlet for frightening fun.

“Each of us has set up elaborate ‘haunted houses’ at our own homes during trick-or-treat in the past and we always wanted to do something bigger like this,” said Smith.

Blacklick Haunted Park consists of a large area at the park’s shelterhouse and a haunted trail. Around 30 relentlessly scary costumed monsters, as well as fearsome scenes and eerie music are featured.

“The haunted trail aspect has been extended this year by about another 150 to 200 feet,” said Smith. “It’s much longer and spookier than in the past.”

Smith said Blacklick Haunted Park will include some old favorite scary creatures, but will also add some new twists, such as featuring a frightening scene from the popular “Purge” films.

“We’re the masters of distraction,” said Clinger, who said a key to a good haunted house or haunted park is creativity and providing the unexpected.

“People scream and we’ve had adults who got so scared they just walked away,” said Smith.

The event is a large fundraiser for Groveport Madison Human Needs and the Groveport Food Pantry.

“One year we raised $4,000 that we divided between the two charitable groups,” said Smith.

The organizers of Blacklick Haunted Park said a main motivation for creating their scary event is to “do something fun and affordable for the kids.”

“People have fun, we have fun, and we’re able to help out Groveport Madison Human Needs and the Groveport Food Pantry,” said Smith. “We love to do it. We’re thankful to the city of Groveport for its help in enabling Blacklick Haunted Park to be successful.”