High fashion came to Canal Winchester on March 7 when the Miss Canal Winchester and Little Miss queen and her court held their 8th annual Fashion Show and Silent Auction in the high school cafeteria.

The event featured local vendors along with auction items. Guests enjoyed sweet treats while they waited for the two-part fashion show split between casual and formal wear.

“The whole court organized this, along with our pageant director,” said First Attendant Hannah Henry.

All of the proceeds from the morning-long fashion show and auction benefitted Relay for Life.

Parker said each court member was challenged with a goal of four donations. Third Attendant Kellie Johnson said they talked with many businesses and community members who were very willing to donate to the effort.

“This is the main fundraiser by the queen’s court for Relay for Life and a lot of people are aware of the organization,” said Parker. “I’ve been a part of this for three years and it’s gotten better every year.”

The 67 items up for auction included a diamond and pearl necklace, an opportunity for private soccer instruction, various gift baskets and a collection of socks.

“We try to have something for everyone,” said Parker.

This was the first time high school junior and first attendant Hannah Henry participated in the fundraiser.

“It was awesome to see such a great event going on and all of the businesses that support Relay for Life,” said Henry. “It feels like the whole community is supporting the organization.”

Miss Canal Winchester Pageant Director Melanie Boise said the 2020 event was the biggest one in the eight-year history of the show and auction—both in size and fundraising—and resulted in a donation of $2,173 to Relay for Life.

“This was, by far, the largest turnout of guests and donations,” said Boise, who estimated the overall attendance at 150 to 160 people. “In our first year, we had only five vendors and 40 people attend the event. It has grown in both attendance and in the involvement of the girls. We also get a tremendous amount of support from the community.” 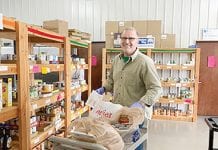