He was a nominee for New Male Artist of the Year at this year’s Academy of Country Music Awards. He has two No. 1 hits and a Top 10 single. And he is performing at this year’s Madison County Fair.

The Madison County Senior Fair Board is pulling out all the stops for opening night entertainment for this year’s fair. Ray is the headline act. Joining him on the night’s bill are fellow country music artists, Drake White & The Big Fire and Clark Mason.

Tickets are on sale now for the concert, which will take place July 7 on the infield at the fairgrounds grandstands in London. The stage will be located at the Elm Street end of the infield. A beer garden and food vendors also will be on the infield.

“We’re hoping we will attract visitors from surrounding areas,” said Deetra Huntington, a member of the planning committee.

In a letter outlining sponsorship opportunities for the event, organizers state they anticipate hosting approximately 5,000 concert goers. With such a large event comes the need for lots of preparation.

Huntington said the committee is already working on stage, lights and sound details, looking for food vendors, and lining up security with the Madison County Sheriff’s Office. They also are seeking sponsors to help defray the cost of the concert and recruiting volunteers to help with the gate entry and crowd management, among other tasks.

For more information about tickets, sponsorships, or volunteering, call Nathan Morrison at (937) 423-3302. The fairgrounds are located at 205 Elm St., London. This year’s fair runs July 7-13.

Michael Ray is a Florida native who won the CW’s singing competition, “The Next: Fame is at Your Doorstep,” in 2012. John Rich of the country duo, Big & Rich, served as his mentor on the show. Later, Ray and Rich co-wrote Big & Rich’s single, “Run Away With You.”

Ray’s self-titled debut album, released in 2015, yielded two No. 1 hits on the Country Airplay Charts, “Kiss You in the Morning” and “Think a Little Less.”

“One That Got Away” was among the standout tracks on Ray’s sophomore album, “Amos,” named for his late grandfather who nurtured his love of music and with whom he performed while growing up. The album came out in 2018.

Ray was nominated for New Male Artist of the Year at the 2019 Academy of Country Music Awards, along with Jimmie Allen, Jordan Davis, Mitchell Tenpenny and winner Luke Combs.

He is scheduled to release a new song, “Her World or Mine,” on May 13.

Drake White is an Alabama native who’s name has been on many new-artist watch lists since he released his first album, “Spark,” in 2016. His song, “Makin’ Me Look Good Again,” was named International Song of the Year at the British Country Music Awards.

Clark Manson hails from Covington, Ohio. He got his start in music with a hand-me-down guitar when he was 12 years old. He began playing bar shows while he was in college and has gone on to write and co-produce his own music. His songs tell the story of his rowdy youth, as well as his adult life as a loving husband and father. 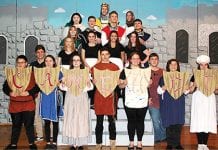