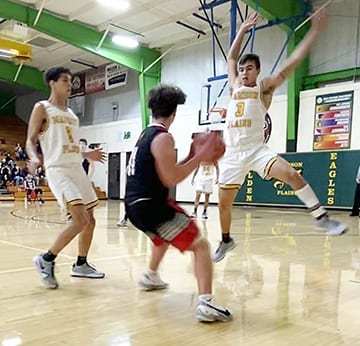 The Madison-Plains boys’ basketball team hosted the Panthers of Fairbanks on Jan. 5. The Panthers came into the game 3-2 overall and 2-1 in Ohio Heritage Conference (OHC) North divisional play.

Fairbanks came out the second half with a new game plan, winning the third quarter 4-12, giving the Panthers a 24-22 lead going into the fourth.

In the end, the Golden Eagles’ defense prevailed, leading to a 32-29 victory. Madison-Plains moves to 5-3 overall on the season and remains 3-3 in OHC South Divisional play.

The Panthers’ 29-point effort stands as the least amount of points the team has scored this season and 12.4 points below their average points per game.

Madison-Plains is back in action on Jan. 8 as they travel to Mechanicsburg which is 1-4 overall and 1-4 in conference play.