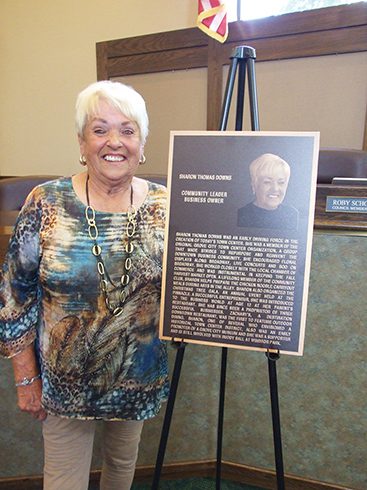 Sharon Downs (nee Thomas) has always been a fixture in the city of Grove City.

When she was a child, she could often be found riding her bicycle up and down the streets, waving hello to everyone who would pass her by.

When she was a teenager, she could often be found driving her car throughout the city’s downtown, waving hello or goodbye to the passersby in her much-loved silver gray 1957 Chevy convertible with the sharp red interior and the glasspack muffler. Admittedly, she put many miles on the odometer during this time because she wanted to give the people in her sparsely populated hometown something beautiful to look at.

“My car was so hot,” said Downs with a big laugh. “I was so proud of it because I had spent years saving up by working at my parent’s place (Rush N Opal’s Party House) to be able to afford that car so of course I wanted to take it out and show it off any chance I got.”

When she was an adult, she traded in riding her bicycles and driving that car throughout the city to walking in and out of Zachary’s, the restaurant she co-owned with her husband, Joe Downs. There, she would serve the food and beverages to the masses who decided to take advantage of the nice days with the area’s first outdoor seating and eating arrangement.

It was during this time in Downs’s life when she began to think that there was something amiss in her beloved city.

“I would look around and there would be nothing there,” she said. “I wanted to see flowers, I wanted to hear live music, and I wanted to see new businesses going up in the area. But back then, no one was really thinking about putting floral arrangements downtown, or creating live music venues or anything like that; at least not around these parts.”

Tapping into her well of determination – “she inherited those skills from our parents,” said Daryl Thomas – she told her friends and fellows members of the business community that they had to put all of their heads together to come up with ideas to “spruce up the place” and “add a bit more life” to this region. Thus began the formation of the Grove City Town Center organization and the slow transformation into growing and bustling area it is today.

“She really started the rebirth of our downtown,” said Mayor Richard “Ike Stage.

On July 29, Stage was just one of dozens of city officials, civic leaders, long-time friends and beloved family members who came out to City Hall to celebrate Downs and her contributions to the community as she was named the recipient of the 2022 Grove City Rotary Club Service Above Self award.

“It is well deserved, in my opinion,” said Thomas. “She has done so much behind-the-scenes work to make an impact on this place she loves so much.”

Members of the rotary and the citizens who served on the Service Above Self selection committee said they could not have agreed more.

“I have known Sharon for close to 20 years and I have always been very impressed with her activism in trying to create new businesses and her attempts to bring new opportunities to the community,” said Jim Hale, who represented the Southwest Franklin County Historical Society on the selection committee. “Now, not every idea of hers manages to come to pass, but she is sure going to work hard and work with others to try to make it happen.”

In addition to helping establish the original Grove City Town Center organization, she was a promoter and advocate for the city’s museum, an activist and cheerleader for the city’s Buddy Ball League, the organizer of the popular Christmas Tree Gala at the Pinnacle, a long-time member of the chamber of commerce, and a second generation member of the city’s community club.

“My mother was heavily involved in the community club and I learned so much from the women within that association,” said Downs. “I can only hope I have taught something to the younger women in the club, and to those outside of the club, too.”

Environmental education at the EcoFest