She leans over to inspect an orange-yellow stain on the front of a band uniform, “Toby, Toby had cheese,” Julie Dowler announced as she opened another travel pack of cleanser and began scrubbing the stain.

Dowler has been with the Groveport Madison Marching Cruisers for eight years, six of those as its Uniform Chair. She and her co-chair, Stacey Shelton, oversee the sizing, sewing, and ordering of 125 Marching Cruiser band and color guard uniforms.

“I’m only a helper, Julie does everything,” Shelton said.

An average day for Dowler starts as a sixth grade school teacher for Columbus City Schools. At about 4 p.m. she picks up her sophomore to get to band practice, where they sometimes can stay until around 10 p.m. Other days include acting as athe fundraising and volunteer coordinator for Boy Scout Troop 71. All three of her boys have been in the troop and band.
Dowler is easily recognized as the mother hen for the Marching Cruisers and Troop 71.

“She strived to make sure each Cub Scout succeeded,” Scout parent Shane Cartmill wrote in an email to the Southeast Messenger. “If your son didn’t have the activities completed or signed off on, she would follow up with the scout and the parent. If there was an issue because of time, money, resources, Julie would figure out a way to make it happen.”

“She is a kid-first person,” said Groveport Madison Band Director Bart Pickenpaugh when describing Dowler. “If it wasn’t for Julie, the kids wouldn’t have such an enjoyable experience. Her being there enables them and me to focus more on the music.”

Work for the Marching Cruisers starts in June for Dowler when she starts the uniform fitting for the students she considers family.

“This band is a family, we cry together, laugh together,” Dowler said.

The Marching Cruisers are qualified to compete at Ohio Music Education Association State Marching Band Finals on Nov. 4th. In December, they plan to march in the Chick-fil-A Peach Bowl in Atlanta, Ga., and Dowler plans to be right there with them.

When asked what her hopes are for the band, Dowler said, “I want them to be inspired to be the best people they can be and the leaders that they are…they have what is in them to be amazing parts of our society.”

When it comes to scouts or band, Dowler can’t pick a favorite, but she admits the Marching Cruisers takes more of her time.

Time is a rare commodity for her since she also works with the Schottenstein Center covering sports events. It was this part time job that helped her fulfill some dreams for students in the band. One year some of the students didn’t have the money to participate in their annual band camp so Dowler paid their way.

“We do it for the kids,” Dowler said.

But how does she keep her energy up?
“I’m surprised she’s not green herself,” Pickenpaugh jokes about Dowler’s love

“I want the kids to have a positive experience, so it’s that desire to encourage the art…and lots of Mountain Dew,” Dowler said with a smile. 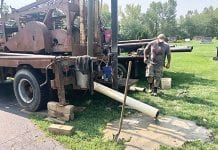